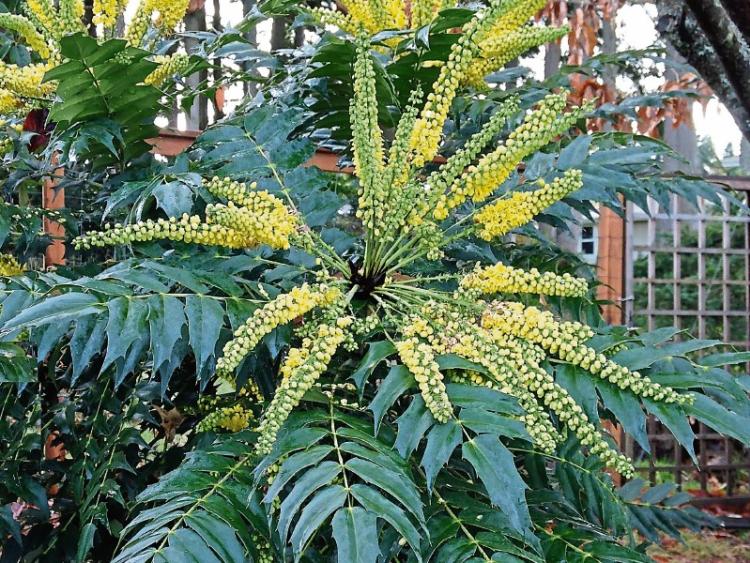 Native to China there are about 70 different species of mahonias. They do well in Ireland because they prefer full or partial shade

Mahonia is a plant in full flower this handsome plant, which comes from China and Taiwan, is one of the most popular winter flowering evergreen shrubs.

It makes a bold, colourful highlight with its remarkable leaves up to 16 inches long and long terminal pendulous clusters of lemon yellow blooms with a scent similar to lily of the valley. It is a vigorous upright evergreen medium size shrub. It will grow in shade but needs some protection from frost and wind to avoid leaf scorch. There are about 70 different species of mahonias to choose from such as Mahonia fortunei, Mahonia x media ‘Charity’and Mahonia reopens. Mahonias grow in moderately fertile , humus rich moist but well drained soil. They prefer full or partial shade, but will tolerate sun if the soil is not too dry.

One of the most bizarre little trees that you can grow in the garden is Corylus avellana ‘Contorta’ (corkscrew hazel). The Americans call it Harry Lauder’s walking stick after a vaudereville comedian who used a twisted bent cane as a walking stick.

It is one of the few winter trees that really looks at its best with its leaves removed. In early spring it produces catkins which are the pendulous flowers that hang from the tree.

The Alnus (Alder) also produces catkins. The hazel and alder produce male and female flowers on the same plant. The catkins are the male pollen producing flowers.

The female flowers are separate and will produce fruit like hazel nuts later in the year. The hazel produces lovely greenish yellow catkins. In summer the hazel is covered with crinkle crepe paper like leaves that look as if they are suffering from some pest attack. Characterised as a large shrub, it can grow up to 20 feet in height and width. Its twisted curly branches look great in flower arrangements.

Since the plant is grafted it has a tendency to produce suckers which grow straight from the rootstock and these straight suckers must be removed each year.

We have a contorted hazel that is grafted 4 feet above the ground to produce a standard form.

The alder produces dusky purple colour catkins as they develop which change to a colourful mixture of lime green and maroon as they mature. The alder is an excellent tree for damp ground, it likes wet conditions and does not mind having its feet in water.

Roses can be pruned now before they start into growth. After pruning spray the ground with a dilute solution of Jeyes Fluid, mixing a cap-full of Jeyes fluid with a gallon of water to kill the spores of blackspot in the ground. It is important to spray before the new growth emerges because the spray will kill the young growth.

Give the base of the roses a mulch of well rotted manure or compost.

Since we started using Jeyes fluid we have almost eliminated the blackspot problem which has been very common in recent years due to high rainfall. Now is the time to plant bare rooted roses, although most roses are now sold in pots.

Avoid planting new roses where old ones have been removed, unless the soil is replaced by new soil to avoid disease.