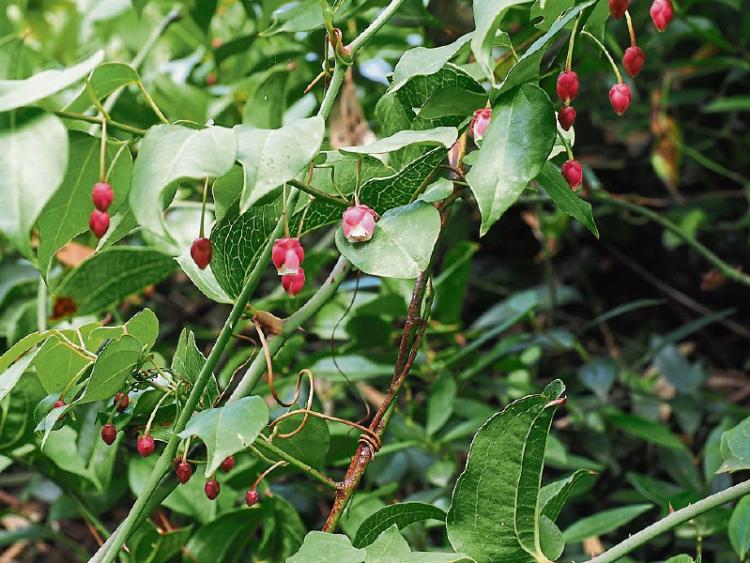 Berberidopsis corallina is a climber from Chile in full flower at present. It is an evergreen weakly twining climber with dark green leaves that can be grown against a wall or trained into a tree.

The plant produces dark red spherical flowers in a cluster from summer to early autumn. Grow the plant in humus rich neutral to acid soil which is moist but well drained, in partial shade with shelter from wind. The plant is frost hardy but protect the roots from frost with an autumn mulch. The plant needs no regular pruning but can be trimmed in spring to fit into the available space it has to grow.

Herbaceous plants of the week

Hemerocallis or daylilies are herbaceous perennials with thousands of named cultivars to choose from. They are clump forming with dark green leaves up to 4 feet tall. The flowers come in a variety of shades like circular, star-shaped and trumpet which remains a popular choice.

The flowers range in colour from almost white through yellow and orange to dark purple and deep red.

Most flowers last for only one day. Daylilies like a fertile, moist but well drained soil and full sun. Dig in lots of compost into the soil before planting. Give the new plant a lot of care in its first season and it will reward you with lots of blooms in later years.

Feeding is essential and a sprinkling of high potash fertiliser in spring followed by a mulch of compost will encourage strong growth and lots of flowering stems. From spring until the buds develop, water freely. Dry conditions and excessive shade will reduce flowering. It takes a few years for daylilies to become fully established.

Once they do they are drought tolerant and mostly pest and disease free. After a time they can become congested and will produce less flowers. Divide the clump in spring and replant into enriched soil.

Bulb of the week

Tuberous begonias are outstanding garden performers that offer a wide variety of heights, bloom sizes and brilliant colours in the garden.

They flower from July through to the autumn and can continue until the first frost appears. They are planted close to the surface, just barely cover the bulb with a thin layer of soil. The average plant height is 10 to 12 inches. They grow best in light shade, direct sunlight causes burning of the flowers and leaves.

The bulbs are tender so they must be lifted out of the soil and stored in a frost-free over the winter.

Allow the bulbs to dry out before storing. In spring start the begonia tubers indoors and plant out when the risk of frost is over. Use potting compost and sand or perlite as a growing medium. Warm humid conditions are necessary to promote growth. Keep soil moist but not wet until the bulbs start to shoot.

Peach trees grown in the open against a wall can suffer from a disease call peach leaf curl. The leaves are covered with reddish-pink spots which fall off and the plant will produce no fruit. The problem can be solved by spraying with a copper fungicide or Dithane. Spray just before the leaves fall in the autumn and again from January to February, repeating the spraying every ten to fourteen days.

Plant up specially prepared hyacinth bulbs in pots for forcing to bring indoors for Christmas.

Plant spring cabbage plants this month in ground where early potatoes were grown.

Summer raspberry canes should be pruned now, removing the old canes that produced fruit and tie the new canes onto support wires.

Limerick Flower and Garden Club will resume their monthly schedule on Tuesday 13th September in the Greenhills Hotel on the Ennis road. There will be a demonstration by Rosin Graham.