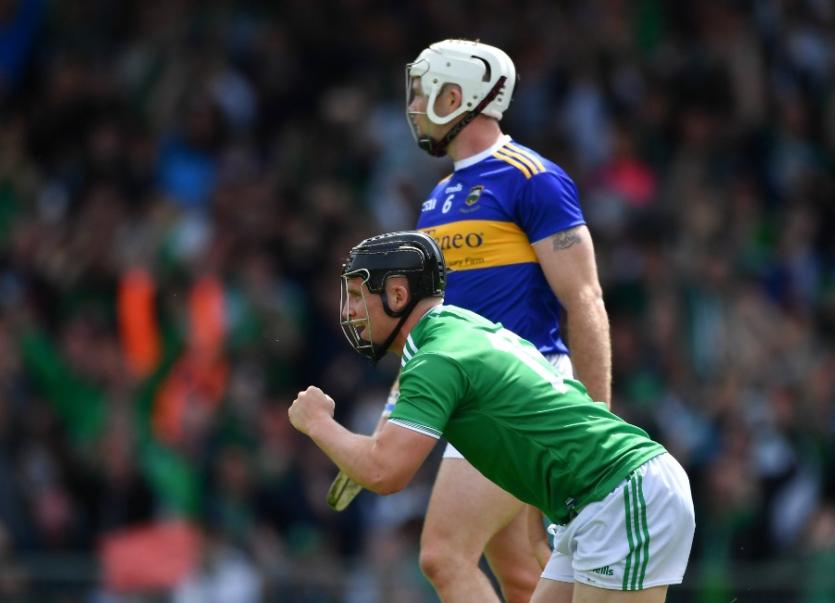 LIMERICK are Munster Senior Hurling Champions for a 20th time after an emphatic 2-26 to 2-14 victory over Tipperary.

For the first time in 82 years Limerick hold the All-Ireland, Munster the league titles.

A run of eight scores down the home straight cast aside the Tipperary challenge for a 12-point victory.

Next stop a July 26/27 All-Ireland semi final in Croke Park for the All-Ireland champions.

Limerick were slow to start but brought a 1-11 to 1-9 lead into the half time dressing room.

Five points, with two in reply, in the final 10-minutes of the half helped John Kiely's side to the interval lead of two points.

It was a half when the sides evenly shared 14 wides and were level on six occasions.

It was 0-3 each after seven minute but Tipperary had looked the sharper in the early minutes.

A third minute save by Brian Hogan denied Cian Lynch an early Limerick goal and the Tipperary goalkeeper was alert to the rebound and his feet denied Kyle Hayes.

Limerick were ahead in the sixth minute, 0-3 to 0-2 but Liam Sheedy's men were two points clear after 10-minutes.

A 13th minute Lynch point was to be the only Limerick score across a 12-minute spell as Tipp's dominance became apparent on the scoreboard as well as on the field of play.

The men in blue and gold pressed home that advantage in the 17th minute when Seamus Callanan goaled. And, it was a goal that could very well have been prevented. Perhaps Gearoid Hegarty was harshly penalised in the middle of the field and first Limerick remonstrated and the sliothar was moved forward - then the men in green were caught asleep and a quick free found Callanan in space and he had nothing but goal on his mind as the carrying forward.

That had it Tipperary 1-6, Limerick 0-6 in the first Gaelic Grounds provincial SHC final between the sides since 1996.

The response for the next 20-odd minutes of play in the first half was impressive - Limerick scoring 1-5 to three points for Tipperary.

Limerick rattled off the next three points to cancel out the goal but the reply could very well have been instant but a Gillane effort crashed over the bar.

A goal did arrive in the 26th minute. Gillane created the opening when he opted not to try for a point from the left wing and when he worked the ball goalwards, his delivery into the goalmouth was finished to the net from close range by Peter Casey.

The goal levelled the final but Jason Forde had Tipperary back in front moments later.

Brian Hogan then came to the rescue of his team with another fine save in the 28th minute - denying Hegarty.

Then Tom Morrissey and Byrnes (free) found injury time points to ensure the half time lead.

A Byrnes free was the only score of the opening seven minutes of the second half with Kyle Hayes denied another Limerick goal but a third superb save of the day from Brian Hogan.

A Forde free reopened the Tipperary account and within a minute they had their second goal - John McGrath with a fine finish to level the final for the seventh final and 43-minutes played in an absorbing final.

Like the first half the Limerick response was impressive with two Casey and Gillane (free) points to cancel out the goal.

The scoring sequence soon had five Limerick scores across a run of six.

Kyle Hayes was earlier denied a goal but made no mistake in the 22nd minute of the game when he crashed to the net after a delightful flick from Casey.

When Lynch, Casey and Hegarty added points Limerick were nine points clear and an hour played - 2-21 to 2-12.

The lead was copperfastened when Nickie Quaid saved brilliantly from Callanan in the 22nd minute.

There was no way back for Tipp as Limerick powered over the winning line.