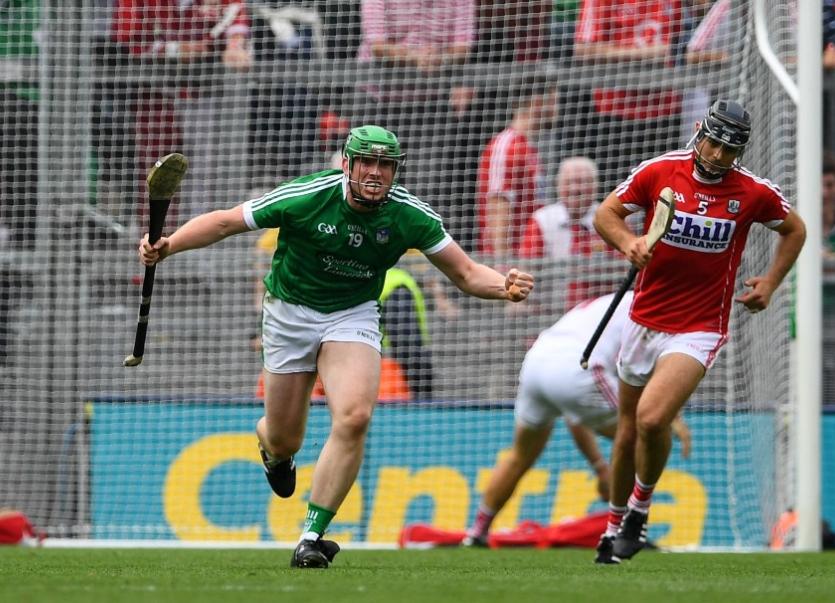 “THIS is how championship games are won – go for it”.

The message delivered to Shane Dowling by coach Paul Kinnerk as the Na Piarsaigh man dusted himself down to take the all-important penalty two minutes into the second half of injury time.

It was Dowling that was fouled and as referee Paud O’Dwyer stood with outstretched arms, John Kiely and his Limerick selectors consulted along the sideline.

Easy decision according to the Limerick manager.

“You have to – you have to go for it. With Shane Dowling and Aaron Gillane on the field why not! Shane is a brilliant ball striker and one-on-one with a keeper I would fancy him all day long. He stuck it fantastically,” said Kiely.

Dowling didn’t disappoint and rifled into the top corner to the right of Cork goalkeeper Anthony Nash. A shot that most didn’t see until the net bulged in front of Dineen Hill 16.

Those in the upper tier of the Hogan Stand could see Parnell Park just two miles away in the distance and back in February, Dowling blasted a wonder goal to the net in the Donnycarney venue as 13-man Na Piarsaigh reached the All Ireland club final.

Five months later, Dowling and his five club-mates from Na Piarsaigh are back in another All Ireland final.

“I want Limerick to go all the way,” rejoiced Shane Dowling after the final whistle when speaking to RTE.

“I really hope we're not just going to get to the final to march behind the band,” urged the Na Piarsaigh man.

Sprung from the bench when Limerick were six points in arrears, the former All Star hit 1-4 to help inspire John Kiely’s men to victory.

“It's pure magic – to hear 'Sean South Of Garryowen' ringing out there,” he gasped.

The star forward appealed to all in Limerick to allow the team prepare uninterrupted for the August 19 final.

“Listen we're a passionate county but I will ask for one message. I'll ask the supporters to enjoy it and I hope they embrace it, but I do plead that they let the players focus for the next three weeks because we've been here a number of times in the last 30 or 40 years,” stressed Dowling.

The Na Piarsaigh man has started just two of the seven games in this championship but was one of seven substitutes used by Limerick in this Croke Park thriller.

“Obviously you are disappointed when you doing get to start but you have to soak it up and When you get you chance you have to take it. I'm delighted things fell my way. We're a serious panel and I genuinely mean that. It's going to be a 20-man game and whatever anyone's part is, we'll do what we're told,” he said.

“We are a seriously ambitious group of players and I can't tell you if Limerick are going to win an All-Ireland, but I'll make one promise: the next three weeks we'll work hard and we'll try our best,” he vowed.

Dowling played in the 2013 and 2014 All Ireland SHC semi final defeats, along with current captain Declan Hannon.

The Adare man stressed only an All Ireland title will make real history for this bunch of Limerick hurlers.

John Kiely’s side go to Croke Park next month bidding to end a 45-year wait for a Liam MacCarthy title. While Hannon stresses that history is no weight, the captain hopes that the positives of 2018 aren’t over.

“We have got to an All Ireland final but we want to win it to really make history,” stressed the centre back.

“None of us in that dressing room ever talk about it or think about it. This is a new era and a new group of lads who are trying to create their own history,” said Hannon.

“That’s a happy dressing room – a tired dressing room with a lot of sore bodies and it will take a few days to recover from today. We are certainly very happy after that result,” he smiled.

“It’s a marvelous feeling – one none of us have experienced before bar Seamus Hickey from 2007. The boys are very level headed and we will enjoy tonight and then get back to recover and get ready for the All Ireland final in three weeks time.”

Hannon was on the Limerick sides that suffered semi final defeats in 2013 and 2014.

“They were heart breaking losses but I don’t think we were ready for the occasion or those semi finals. We are a different group mentally and physically, this 2018 squad. I just thought we were in a better space coming into today,” he explained after the four point victory.