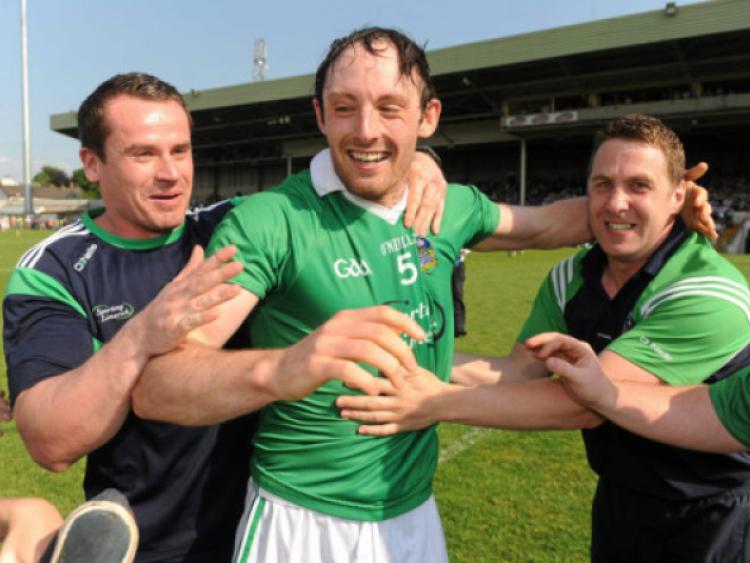 THERE were scenes of wild celebration in the Gaelic Grounds on Sunday as Limerick recorded a 1-18 to 1-15 win over Tipperary to reach the Munster final on July 14.

THERE were scenes of wild celebration in the Gaelic Grounds on Sunday as Limerick recorded a 1-18 to 1-15 win over Tipperary to reach the Munster final on July 14.

The scenes at the final whistle told the story. June 9 will be remembered for the day that the Summer came alive. It was everything that dreams are made of – the temperatures reached 26 degress, almost 20,000 supporters rocked the Gaelic Grounds and the Munster champions were sent packing.

The Limerick public came more in hope that belief but out on the field the Limerick players displayed an inner confidence that only those closest to the panel knew was possible.

All known form suggested that a Limerick win wasn’t possible. As Limerick went in search of a first Munster SHC win since 2007, they were the bookies’ 7/2 outsiders against the second favourites to lift the Liam McCarthy next September.

But it was Limerick that hurled like real contenders – setting the tempo from the start to dispel any fears that playing league hurling in the second tier would be a disadvantage.

Supporters wanted a display of passion and spirit and that was certainly at the foundation of this unbelievable win but there was much more.

They played with a two man full forward line and then out the field set about dominating all individual roles and especially attempting to stop the Tipperary launchpad of their half back line.

Then when the game opened up Limerick rang the changes and two subs Shane Dowling and Niall Moran chipped in with some of the clinching scores.

In the sweltering conditions it appeared strange that Limerick went through a 30-minute warm-up but it worked a treat and they dominated from the off with a huge work rate of hooking, blocking and tackling.

And the forwards were revelling in the space with Donal O’Grady, James Ryan and Declan Hannon all scoring from play as Limerick led 0-4 to 0-2 after 11-minutes.

At the other end there were scares but Nickie Quaid pulled off two superb saves to keep Tipp at bay.

Then the net was rattled and and it came from Seanie Tobin.

Nineteen minutes had lapsed when he pounced to pull first time after an initial David Breen flick was cleared off the line.

The goal had Limerick 1-6 to 0-4 clear and the Gaelic Grounds was filling with optimism.

John O’Brien was the one Tipperary forward winning his dual and his points steadied their ship.

Nonetheless Limerick went back to the interval dressing room 1-7 to 0-7 clear and with the cheers of the crowd in their ears.

The expected Tipp backlash came on the resumption with half time sub John O’Dwyer running havoc with three successive points inside four minutes.

Captain Donal O’Grady eased Limerick back into the contest with his second point but Tipp kept coming and their half back line were now evident.

Then Brendan Maher had Tipp ahead.

Worse was to follow when O’Dwyer crashed home a goal for a 1-13 to 1-9 lead with exactly 20-minutes to play.

The expected script would be that Limerick would not crumble.

Indeed Limerick outscored Tipp 0-9 to 0-2 in the final 20-minutes to erase the memories of last year’s final quarter collapse when they were seven points clear.

The response was incredible and within eight minutes of the goal Limerick were back level 1-14 each.

Crucially Limerick then went ahead with Dowling coming deep into his own half to point a free.

Moran then shot on the turn and Limerick were ahead and supporters were beginning to allow themselves to dream.

With Man of the match Richie McCarthy, Wayne McNamara and Stephen Walsh leading a huge defensive charge there was no way through for Tipp.

A Kelly free left it 1-16 to 1-15 with five minutes to play but Limerick had enough of hard luck stories.

O’Grady pointed his third and his with his clinched first the Ennis Road erupted in belief.

Only a goal could denyLimerick now and even the introductin of Lar Corbett couldn’t find a score as Hannon sealed a famous win with his ninth of the day.