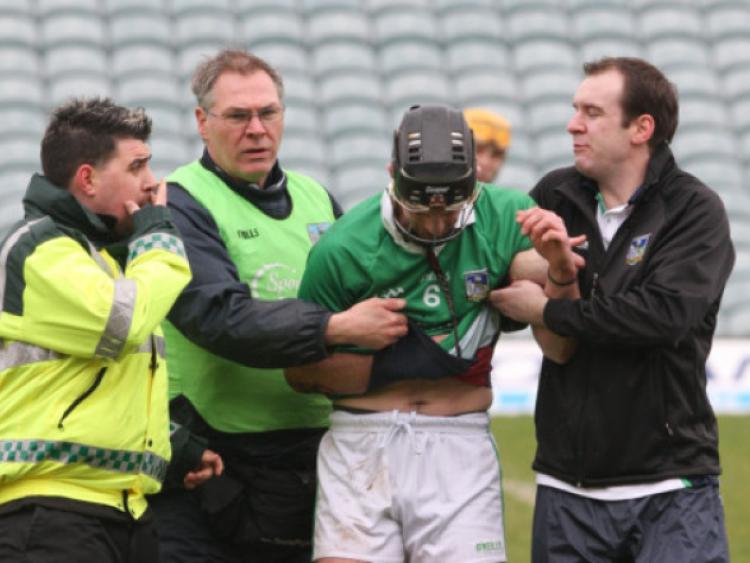 Limerick hurling captain Donal O’Grady will miss the rest of the Allianz Hurling League Division 1B campaign after breaking his collar bone against Carlow on Sunday.

Limerick hurling captain Donal O’Grady will miss the rest of the Allianz Hurling League Division 1B campaign after breaking his collar bone against Carlow on Sunday.

O’Grady is expected to be back in time for the Munster semi-final against Tipperary on June 9 but he will miss the league games against Dublin, Offaly and Wexford as well as a potential Division 1B final and Division 1 knockout games.

O’Grady picked up the injury in the first half of last Sunday’s 3-10 to 1-13 win over Carlow in the Gaelic Grounds.

“It’s the first time that’s ever happened to me,” said O’Grady.

“There was a clearance down the field and I caught the ball and handpassed it to Paul Browne. I ran on to give him an option of a return pass but he handpassed it back to me and the Carlow man lined me up beautifully. It was textbook.

“There’s talk of being out for six to eight weeks, for the rest of the league anyway,” said the Granagh-Ballingarry clubman.

“It’s the type of break that starts to knit again within three or four days.

“No surgery is required but I’ll be seeing an orthopaedic specialist on Friday, to make sure that it’s knitting fine. Then I’ll start on a programme at the weekend.”

O’Grady suffered his setback 13 weeks before Limerick host Tipp in the provincial semi-final.

That gives the centre-back plenty of time to be ready, but he added: “The problem is now. The league is getting serious and we don’t know what’s going to happen next year.

“I should be back for Tipp but if the team is settled and on the back of a good league run, they might not find anywhere to squeeze me in.”

O’Grady was only appointed captain a couple of weeks back after the Limerick management were allowed to choose their preferred candidate rather than have to pick someone from the county champions.

Limerick play Dublin at 5pm in Croke Park this Saturday, March 16, and it will be interesting to see who Limerick now name at centre-back. Wayne McNamara replaced O’Grady the last day and is one option while Gavin O’Mahony, Seamus Hickey and Declan Hannon could also be considered.