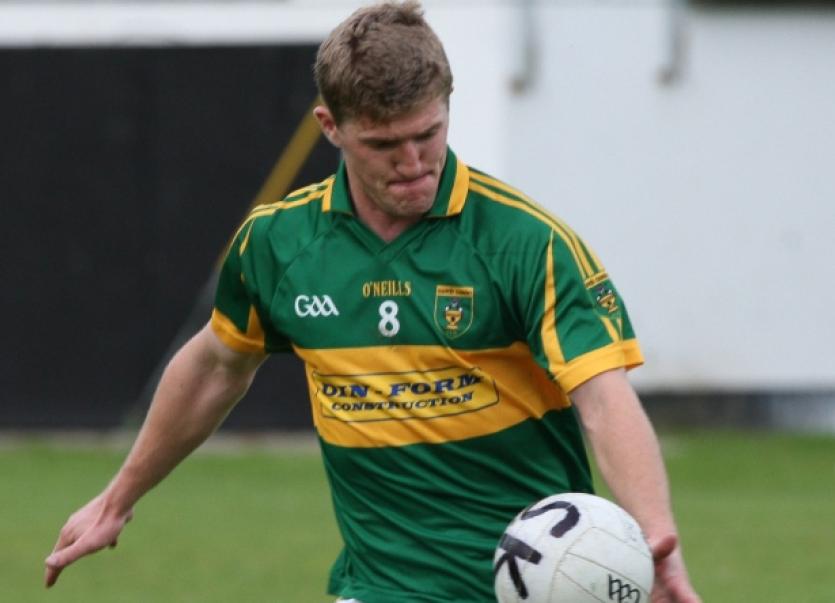 THREE games take place this weekend in the Limerick SFC.

THREE games take place this weekend in the Limerick SFC.

Last season’s quarter-finals St Kierans can put one foot back into the knockout stages with their third victory.

Their wins over St Patricks and Newcastle West see them sit on top of group one and to remain unbeaten would leave them in a great position of only needed a result from their final two games to advance.

Reigning intermediate champions Pallasgreen will look to build on their last outing when only a late fight back saw Monaleen snatch a share of the spoils.

However, Pallasgreen haven’t kicked more than six points in their outings to date and will most likely need to surpass that to get a win.

But Pallasgreen have been motoring nicely in the ACFL. They impressively sit on top of group two with five wins and a draw from seven outings. In the other group of the football league the St Kierans record is 50-50 with three wins from six outings.

Both clubs come off the back of intermediate hurling action last weekend.

While Pallasgreen now face into a relegation battle with Kildimo-Pallaskenry, St Kierans will be quietly happy with their first season and now look forward to playing to playing Claughaun in the IHC County Cup semi-final.

In the Bog Garden, Rathkeale

This is a first meeting of their western sides in the Limerick SFC since 2010. On that occasion Adare were 2-7 to 0-12 winners.

This Friday, victory is vital to both to become serious contenders for the knockout stages.

Neither won in the previous round with Newcastle West losing to St Kierans and Adare drawing with St Patricks.

Newcastle West, under Teddy McCarthy and Billy Lee, had a run out this Tuesday night in the ACFL. They lost to Fr Caseys but the outing should be ideal preparation for the weekend.

They will be without Jamie Lee, who is holidaying abroad.

However Michael Dowling is back in training in recent weeks and could make an appearance after injury.

Stephen Lavin missed the Adare hurling loss to Knockiney last weekend but will be available for this football tie.

Donncha Sheehan picked up a knock in that hurling game and could be in doubt.

A rare meeting between these sides.

Mountcollins could be going through the dreaded ‘second season syndrome’ as they struggle in this season’s senior championships.

The intermediate winners of 2011 have lost both games in the Limerick SFC to-date, while their league form is just slightly better.

Ballysteen came into the championship on a high after their west title and struggled in round one against Ballylanders.

They came back in style to beat Fr Caseys the last time out and will look to build on that win to maintain an interest in the knockout stages of the championship.

Due to the involvement of inter-county hurlers, the games involving Galbally, Ballylanders and Monaleen have been postponed until Wednesday August 21.

Monaleen will play St Patricks in Claughaun, Ballylanders will play Fr Caseys in Feenagh and Galbally will play champions Dromcollogher-Broadford in Kilmallock.