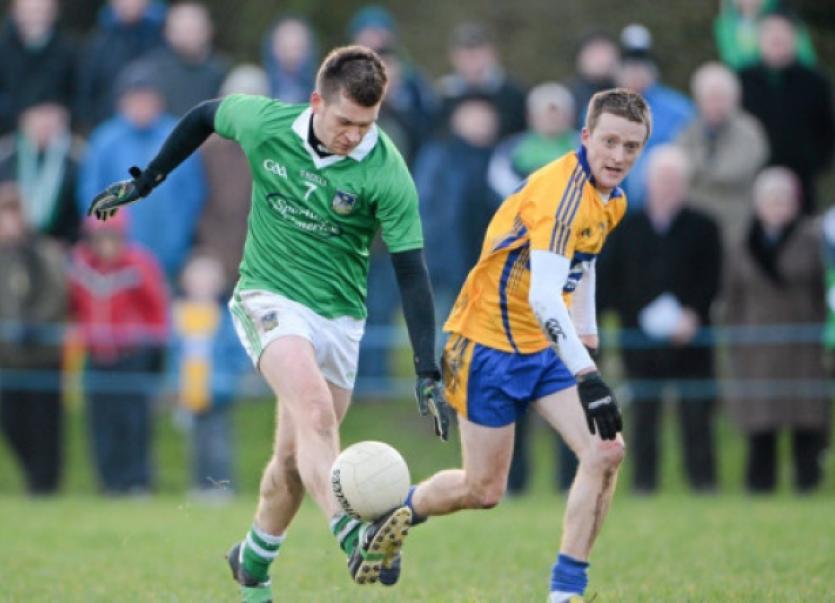 LIMERICK’S best performance of the season secured promotion out of the basement division of the Allianz Football League thanks to a 1-13 to 0-10 win over Clare in Ennis on Sunday.

LIMERICK’S best performance of the season secured promotion out of the basement division of the Allianz Football League thanks to a 1-13 to 0-10 win over Clare in Ennis on Sunday.

Limerick went to Cusack Park in Ennis for this final round game on top of the table but still needing a result to secure promotion to Division 3 for 2014.

Leading 0-6 to 0-4 at half time and facing into the wind in the second half, Limerick backs were to the wall. But they responded in great style to kick 1-7 in the second half and restrict Clare to just six points.

Not only does the win secure promotion but it also sends Limerick to Croke Park for the Division 4 league final against fellow promoted side Offaly. That game will take place on Saturday April 27 as the curtain raiser to the Division Three final between Monaghan and Meath.

After two years in Division Four, Limerick can now look forward to 2014 when they will be joined in Division Three by Cavan, Fermanagh, Roscommon, Sligo, Longford, Wexford and Offaly.

In this vital win over Clare, Limerick won the toss and opted to play with the diagonal wind in the first half.

They raced into a five point lead with just 14-minutes played with Eoghan O’Connor, Ger Collins and Seanie Buckley on the mark from play.

But then they retreated into defensive mode. Clare took advantage and it was 0-6 to 0-4 by half time.

Limerick had a superb save from Donal O’Sullivan to thank for the interval lead because the Monaleen man advanced brilliantly to deny Ian McInerney in first half injury time.

The key moment of the second half came after nine minutes when O’Sullivan again came to Limerick’s rescue.

This time he saved a David Tubridy penalty after Limerick appeared to be harshly penalised for a foul on Gary Brennan.

Limerick were 0-8 to 0-7 clear at that top but it spurred them to greater heights.

Then with 12-minutes to play the win was all but sealed when Ian Ryan palmed into an open goal after Ger Collins supplied the final pass after a fine move involving Mark O’Riordan and Corbett.

Clare needed a goal now to deny Limerick but this was a hugely professional display from Limerick and they never allowed Clare the goal they needed.