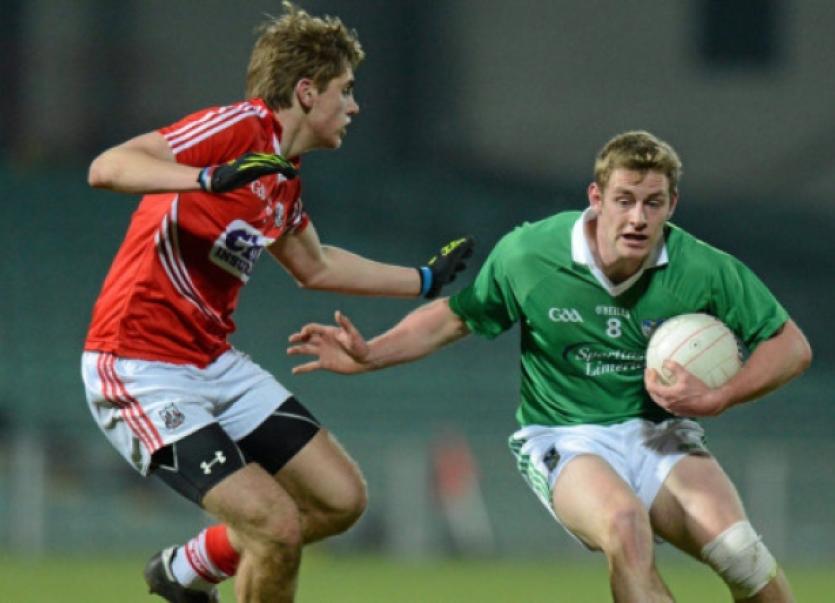 AFTER a promising first half the Limerick U-21 footballers were knocked out the Munster Championship this Wednesday night when losing to reigning champions Cork, 2-14 to 0-11 in the Gaelic Grounds.

AFTER a promising first half the Limerick U-21 footballers were knocked out the Munster Championship this Wednesday night when losing to reigning champions Cork, 2-14 to 0-11 in the Gaelic Grounds.

Limerick trailed 1-6 to 0-6 at half time but had shown great confidence and much ability in the opening 30-minutes.

But when Cork applied early second half pressure their class came to the fore.

Indeed Limerick were to score just once from play in the entire second half and numerous times goalkeeper James Brouder came to the rescue to stop Cork opening a sizeable lead.

Although Cork were dominant for much of the second half, three successive scores from Limerick left it 1-13 to 0-11 with just under 10-minutes to play.

But the goal Limerick needed to propel them towards a shock never arrived and infact it was Cork that sealed their Munster final appearance against Tipperary with another late goal.

The Rebels were the hottest of 1/25 favourites to defeat Limerick, so there was much to admire about the performance of the home side in the Gaelic Grounds.

While Cork never looked in serious trouble, the Tom McGlinchey managed Limerick did have the Leesiders on the back foot for periods.

But when required, Cork could increase the tempo and kick the necessary scores and the physicality of the Cork side was noticeable compared to their Limerick counterparts.

But there were positives for Limerick. Goalkeeper James Brouder made five top class saves, Francis O’Riordan kicked seven frees (off the ground), Iain Corbett had some nice spells at centre back and when in possession the likes of Danny Frewen, Danny Neville and Peter Nash showed they can cause problems for any defence.

On a bitterly cold but still night in the Gaelic Grounds Limerick settled well and Frewen and Neville kicked early scores.

But then Cork came to life and by the 12th minute were 1-4 to 0-2 ahead thanks to a softish goal from John O’Rourke.

The response from the 12/1 underdogs was impressive with Nash pointing either side of O’Riordan frees.

Alas, when on top Limerick failed to punish Cork sufficiently and ended the half with six wides, compared to three for the opposition.

Limerick needed early second half momentum but it was Cork that emerged on top from the dressing rooms with quickfire points.

Limerick were to only have two O’Riordan points to show for the opening 20-minutes of the second half.

But Limerick didn’t throw in the towel and two O’Riordan frees and a second point for Frewen gave a glimmer of hope.

But there was to be no late dramatics as a Brian Hurley goal eased Cork into another Munster U-21 football final.