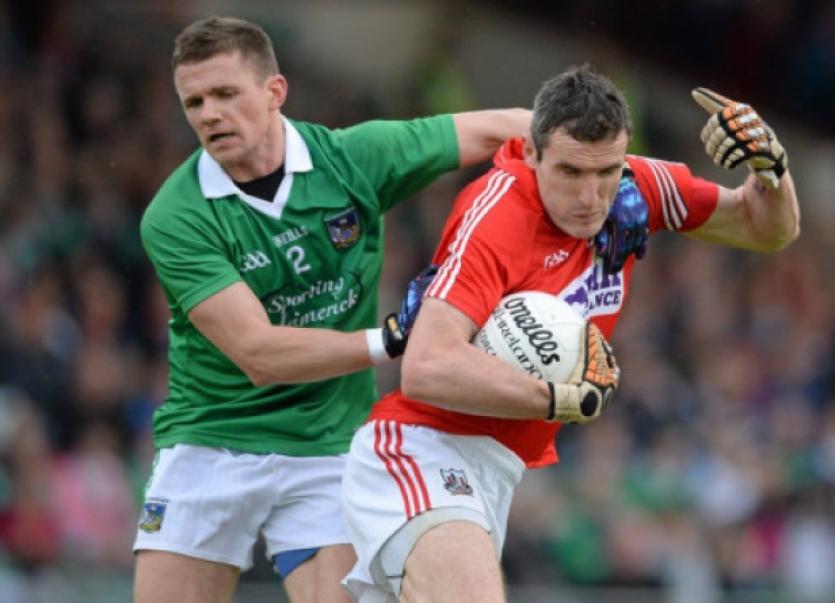 LIMERICKS 2013 Munster senior football championship came to a crashing end as Cork inflicted a 3-17 to 0-8 defeat in the Gaelic Grounds.

LIMERICKS 2013 Munster senior football championship came to a crashing end as Cork inflicted a 3-17 to 0-8 defeat in the Gaelic Grounds.

Throughout that last two decades, there were big defeats in 1996, 1999, 2007 and 2011 but nothing to match the scoring spree that Cork brought to the Gaelic Grounds.

Quite simply, Limerick were blown away by the Cork challenge with three goals in a blistering seven minute spell midway through the opening half setting the tone for a one-sided Munster senior football championship quarter-final.

The attendance in the Gaelic Grounds was 4,138 but 20-minutes from the end many made their way for the exit with Cork already assured of their place in the provincial semi-final against Clare. Cork were 3-10 to 0-4 clear with 20-minutes to go and a triple substitution by Conor Counihan signalled that those on Leeside were content that the job was done.

In reality that job was done much earlier than this. From the opening exchanges, the signs were ominous.

Maurice Horan’s men entered the game on the back of winning promotion from the league and preparations for the Munster SFC were thought to be good, albeit without injured attacker Ian Ryan.

But there was a real sense of optimism. Limerick brought a vastly experienced and settled unit to the game and with John Galvin back after two cruciate ligament operations the hope was that the men in green and white could build on the momentum of last season’s qualifer run when only a late Kildare salvo denied them an All-Ireland quarter-final spot.

Added to that, Cork started with six debutante’s and were forced into a pre-match change with Aidan Walsh missing out.

But it all mattered little.

The Cork machine got up and running early on and Limerick were unable to get as much as a challenge on the powerful running Rebels.

That said, Cork dominated the early minutes but Limerick were hanging on and at the end of the opening 20-minutes it was just 0-4 to 0-2 in favour of the men in red.

Indeed both Limerick scores were points of quality with Seanie Buckley scoring from the left sideline and Ger Collins finishing with a nice turn of foot after a fine diagonal ball from Tom Lee.

But that was as good as it got.

Limerick were to score just a 29th minute Eoghan O’Connor free as Cork went on a goal spree to lead 3-4 to 0-3 at half time.

Limerick set up with an extra man in defence but couldn’t stop the constant Cork support running.

The first goal came in the 24th minute when Johnny McCarthy allowed Brian Hurley to reach highest to get a hand to a Daniel Goulding delivery to divert to the net from the edge of the square.

The goal opened the flood-gates but the warning signs were evident with Donal O’Sullivan and McCarthy making last ditch blocks previously and Ciaran Sheehan blasting wide from close range.

Three minutes later came John O’Rourke’s goal when he scrambled home despite the best efforts of Andy Lane and Paudie Browne on the goal-line. The opportunity had been created by a scorching run of Paul Kerrigan past Mark O’Riordan along the endline.

The third goal came six minutes from the break when Pearse O’Neill powered through from midfield to blast to the net.

Limerick had nothing to loose at the interval and went for broke with three substitutions.

Twelve month ago, a terrible first half against Clare was eroded by a fine second half but this was a very different opposition and there was no way back.

But they never arrived.

A packed Cork defence ensured no space for Limerick and the Shannonside rearguard were already overworked and couldn’t offer their usual effective attacking platform.

Limerick were to end the game with John Galvin at full forward and this appeared to offer some respite but in truth the game was long over by this stage and Cork had rung the changes with all subs on the field.

Limerick had it back to 3-11 to 0-8 with 10-minutes to play but Cork tagged on another six points for good measure with Ken O’Halloran denying John Galvin and Stephen Lavin consolation goals.