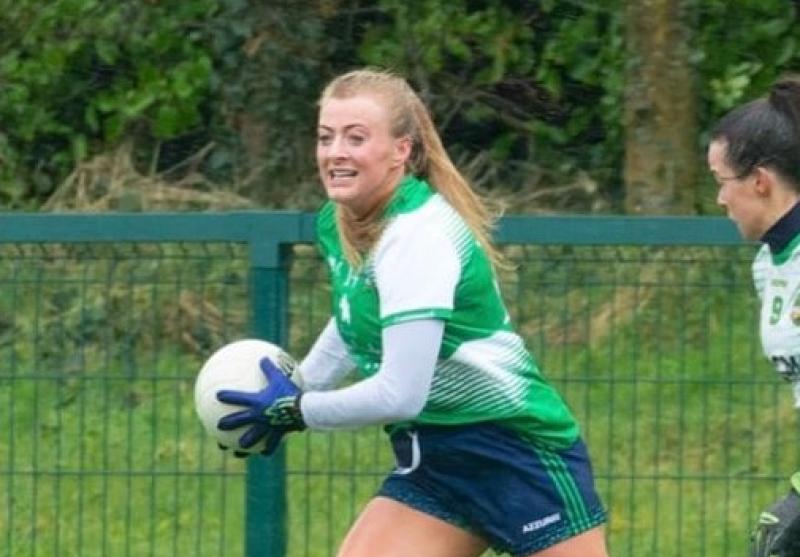 Grainne McKenna in action for Limerick during this seasons' league

THERE is inherent anxiety surrounding a potential meeting with her native county down the road but for now, Gráinne McKenna is at home in Limerick.

She has taken to her adopted county, followed them to Croke Park for on All-Ireland final day, and even gone on to wear the famous green jersey in Ladies football.

It’s all a far cry from the Monaghan girl who arrived to study in Limerick IT a few years ago, when hurling and camogie were foreign to her. She even sees a time when she might pick up the hurl and compete.

“The biggest difference between Monaghan and Limerick is the fact that there is so much camogie and hurling here,” said McKenna.

“When I was working in San Francisco a few years ago, on Sundays I did the scoreboard for matches. I was always getting the hurling scores wrong! I had never watched hurling before and I couldn’t really see the ball.

“When I came to Limerick, I probably knew more about a cream bun that I did about hurling and now I actually love it. I go watch games all the time. I have been to the last few All-Irelands, I go to club games. I wish I played camogie. I probably will start at some stage. St Ailbes have a Junior B camogie team. I would actually love to try and start it, it’s just a matter of trying to find time more than anything. But yeah, I’ve been at the last few All-Irelands. I wear the green jersey, I converted over.”

McKenna used to wear Monaghan colours when she played at inter-county level for the Farney outfit since just after minor level.

She remembers being a mascot as a toddler when her native Tyholland club won a junior club All-Ireland in 2002, backed by the famous McNally sisters. And years later McKenna went on to play with Monaghan alongside one of those, Gráinne McNally.

“Their father was the manager. We would run about 15 laps in training with them. We were only five and me and my twin-sister Dervla used to be running around thinking we were players with them. We went to Manchester when they played a match over there too.”

McKenna wasn’t short of inspiration when it came to her aspiring Tyholland and Monaghan career. Her older sister Orla also played, as did Dervla, and their brother, Ryan.

“In dad’s family, our uncle Patrick and our Granddad would have played a lot. Dad’s family have a lot of athletics in there. Our cousin Catherine ran for Ireland and her mother still holds records for Monaghan, they would be very athletic,” said McKenna.

Arty and Angela paved the way and Gráinne went on to play for Monaghan at minor and then senior levels before a trip to San Francisco for her J1 in 2017.

There were 16 living in a two-bedroom apartment, with the likes of Fermanagh’s Joanne Doonan, Ellen O’Brien of Wexford, Louth’s Kate Flood, and Meadhbh Deeney from Wicklow all living the dream in that house that summer.
McKenna got back to Ireland and eventually had to call it a day with Monaghan when her studies in TUS Midwest had to come first. It was a difficult call to make but it wasn’t feasible making the long trip up from Limerick every week.

“I live in Limerick now because I went to college here and stayed then,” said McKenna.

“I had been driving up and down the road playing club at home. Then coming here and college, and it was madness driving three hours each way. When I came to Limerick it was hard going up and down the road to training. I remember getting home for Wednesday night training and back Thursday morning at 5am from Dublin. It was actually very tough. You know when you are not going to a full week’s training you are at nothing. When you are at that level you have to be there all the time. It was tough now, it was tough.”

McKenna began playing with the St Ailbes club in Limerick and she also starred for TUS Midwest in college football. Earlier this year she captained the team that won the Yoplait Lagan Cup.

The 3-12 to 2-9 victory over TU Dublin capped a wonderful experience for McKenna and her teammates.

“It was actually class. Two or three years ago we won the league and then Covid came and everyone separated again,” said McKenna.

“We were weren’t sure if we were going to get everyone back playing again. When we went back playing again, being off for so long people enjoyed the free time but realised how much they missed it. It was really enjoyable and I am actually involved in the management this year too. We start in a few weeks.”

And while she was throwing her lot in with St Ailbes and TUS Midwest, it was inevitable that she got the call from the Treaty County.

It was an unusual experience but McKenna thrives in the Limerick shirt now, and she wants to help lead them to fulfilling their potential too.

“I made my debut at the start of the year and it was weird, I was actually nervous,” said McKenna.

“We were playing against London and the centre back for London, Ellen O’Brien I actually used to play underage county with her in Monaghan, U-16s and minors. I was nervous and I think she got an awful shock, very surprised. It was weird but very exciting too. I actually enjoyed it, it was exciting meeting all the girls. It’s different when it’s not your own club at home. It took a good while to get used to. The standard would be different but when you look at the likes of the Meath ladies there is a chance and a goal to get to senior at some stage. They made it look so easy. They just proved that it is so easily done.

“Last year we were quite unlucky. We should have got out of Division 4 and junior. If we had, Monaghan were relegated this year and we would have been playing them – I actually couldn’t cope thinking about that.

“The standard is massive but for the size of Limerick, they should be doing better and we will.”