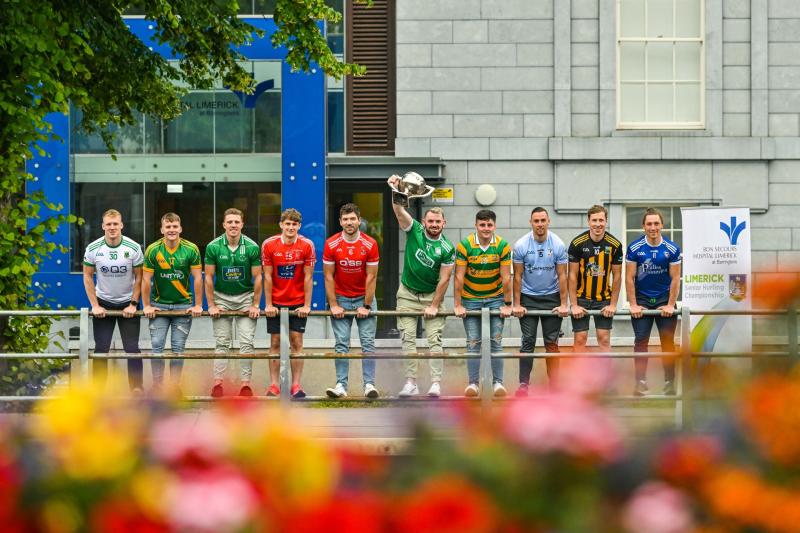 Pictured at the launch of the Bon Secours Limerick SHC. PIC: Diarmuid Greene

LIMERICK All-Ireland hurling heroes will come face-to-face with their county colleagues when the club hurling championship commences next weekend.

All clubs of the 37 Liam MacCarthy Cup winners will be in action across 28 games at senior, intermediate and junior level.

All bar one of the 12 senior hurling clubs will have a 2022 All-Ireland winner in their ranks with 28 of John Kiely’s victorious panel plying their trade in the Bon Secours Limerick SHC. The remaining nine players are spread across the Premier IHC (five players), IHC (just Seamus Flanagan) and Gearoid Hegarty, Cathal O’Neill and the currently injured Brian O'Grady in the junior A championship.

The senior club championship throws in this Thursday evening when Ahane and Adare meet in Claughaun bringing All-Ireland winning captain Declan Hannon into opposition with Morrissey brothers Tom and Dan. Adare will also have Limerick senior panellist Ronan Connolly in their ranks, while fellow inter-county substitute Ciaran Barry will be in the Ahane colours.

On Friday there another single SHC tie – Kildimo-Pallaskenry and newly promoted Mungret St Pauls meet in Clarina. Both had players on this season’s inter-county panel with Kyle Hayes the star attraction in the colours of Kildimo-Pallaskenry, who can also call upon Darren O'Connell. Mungret had Rory Duff on John Kiely's panel.

The four remaining round one games in the Limerick SHC are on Saturday evening.

Champions Kilmallock play Patrickswell in Newcastle West. Kilmallock had six players on the All-Ireland winning panel, albeit Graeme Mulcahy was their only player to play in the final - Mulcahy, Barry Hennessy, Robbie Hanley, Aaron Costello, Oisin O’Reilly and Micheal Houlihan.

They south Limerick side will play a Patrickswell side without the services of Cian Lynch, who is set to be out of action until at least October with an ankle ligaments injury. The Well will still be able to call upon the services of Aaron Gillane and Diarmaid Byrnes.

Ballybrown and Blackrock play in Ballyagran. This tie will be see senior and U20 team-mates Colin Coughlan and Jimmy Quilty in opposition.

All Limerick SHC games next weekend have 7pm starts.