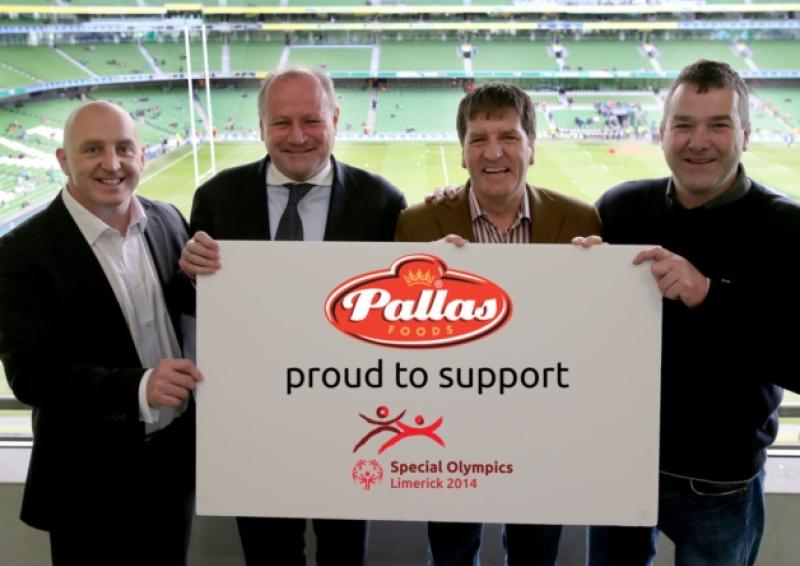 ONE of Limerick’s leading food service distributors will cater for thousands of athletes and volunteers during the Special Olympic Ireland Games after contributing €200,000 as part of a major partnership deal.

ONE of Limerick’s leading food service distributors will cater for thousands of athletes and volunteers during the Special Olympic Ireland Games after contributing €200,000 as part of a major partnership deal.

Pallas Foods will support the Games by supplying foodstuffs over the course of the three-day event in June.

As part of the agreement, Pallas Foods, who have their head office in Newcastle West will provide food and catering to the 1,500 athletes, 500 coaches, and 3,000 volunteers attending the Games.

This is the second consecutive time that Pallas Foods have partnered with Special Olympics with the food service distributor also lending huge support to the 2010 Games, also held in Limerick.

Commenting on the partnership, Matt English, CEO of Special Olympics Ireland, hailed the support of Pallas Foods as a critical component in ensuring the 2014 Games are a success: “We are thrilled and delighted that Pallas Foods has come on board as such an important and valuable partner for the Special Olympics Ireland Games Limerick 2014,” said Mr English. “Food and catering is such a vital part of these Games in terms of ensuring that all of our athletes and volunteers are provided with meals. This key and incredibly generous support from Pallas will be an essential component in ensuring the success of these Games.”

In what will be one of the largest sporting events to take place in Ireland this year, 1,500 athletes will travel to Limerick for the 2014 Special Olympics Ireland Games. The Games will take place over four days from Thursday, June 12 to Sunday, June 15. Special Olympics competitions in each of the sports have been taking place over the past number of months at regional level, and athletes from each of the five regions have now qualified to compete.

For the next three months these athletes will be busy training in their local clubs, supported by their volunteer coaches.

Special Olympics Ireland was founded in 1978. Over the past 33 years the organisation has grown significantly and today has 10,500 athletes participating in 15 sports in 397 clubs. They are supported by a network of more than 25,000 volunteers, making Special Olympics one of the largest voluntary organisations in Ireland.