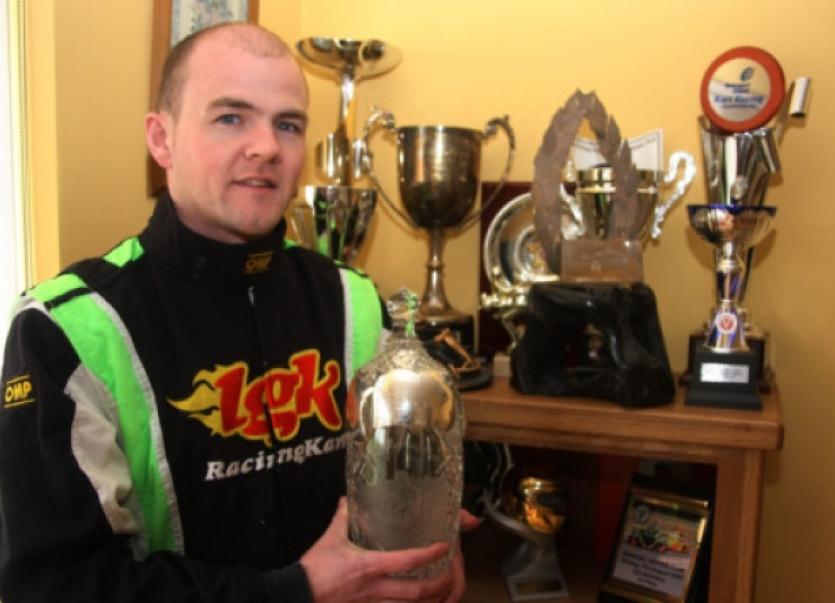 A WEST Limerick karting champion is hoping that his mantelpiece will get even more crowded in the coming months, as he sets out to win his fourth successive national title.

A WEST Limerick karting champion is hoping that his mantelpiece will get even more crowded in the coming months, as he sets out to win his fourth successive national title.

For the past three years James O’Keeffe, 26, a native of Park, Ballyhahill has been crowned All-Ireland champion racer in the KZ2 karting class, and his battle to win another title this year is already underway.

James’ achievements on the track are all the more remarkable considering that he only took up competitive racing as a young adult, often taking on people who had been racing since they were children.

“I got into it when I was about 18 or 19. We would have watched a good bit when we were kids. You can start out from eight or nine-years-old if you want”.

James races his 125cc kart, which has a two-stroke engine and six-speed manual gearbox, at circuits around the country against dozens of racers from all corners of Ireland.

The racing season runs from March to October, and sees competitors take part in tough heats before qualifying for a final race, which often sees up to 20 karts battling it out for a place on the podium. It’s a tough, white-knuckle experience, but James insists that he loves every second of it.

“It’s great, I love it. I reckon I’ll stay in the class I’m in for another while, and make a go of it again”.

The O’Keeffe family home is littered with trophies, plaques and medals from James’ karting career to date, while an adjacent garage has been turned into a hub of gear oil and spare kart parts.

James is the middle child in a family with two sons and two daughters, and he said that they all share, in one way or another, an enthusiasm for motorsport. “I’d be the only one racing, but my brother Aidan used to do rallying before”.

James picked up his third successive national title at a Motorsport Ireland awards event in Dublin last December. This month, he began his quest to claim a fourth title, finishing second in the opening round two weeks ago. He will be looking to go one better this weekend, when he travels to Drogheda to take part in another race meet.

James said that his success was down to the support and efforts of a wide circle of family and friends, but he heaped special praise on his father, Conor, his mechanic Godfrey Kirby, and his sponsors LGK Karting.