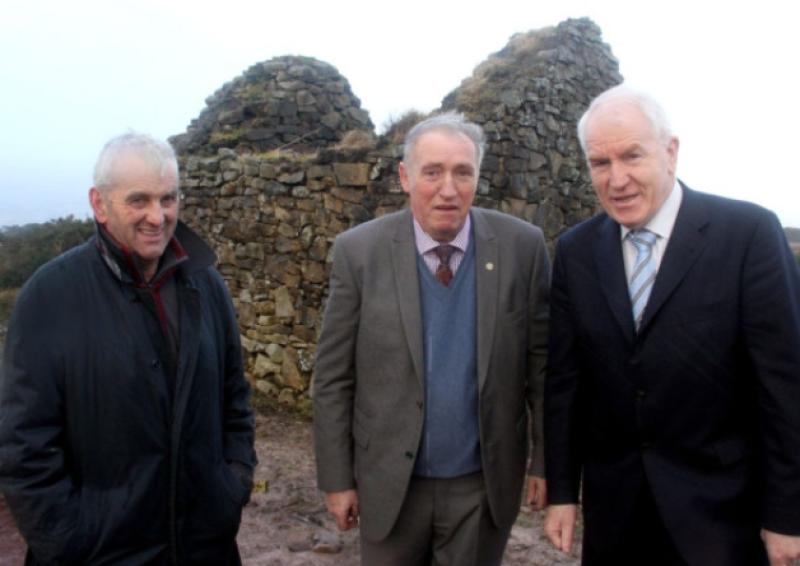 AN idea that was conceived almost 30 years ago with the establishment of the Knockfierna Heritage Society came to fruition this week with the opening of a series of walkways and the launch of a visitor’s guide to the historic site.

AN idea that was conceived almost 30 years ago with the establishment of the Knockfierna Heritage Society came to fruition this week with the opening of a series of walkways and the launch of a visitor’s guide to the historic site.

The wind and rain that battered the hillside on Saturday when Minister for Arts and Heritage Jimmy Deenihan came to perform the official opening did little to dampen the sense of achievement among the core group of people who have worked hard over three decades to make the dream a reality, not least their driving force, Pat O’Donovan.

At the launch on Saturday, Mr O’Donovan thanked everyone who had helped make the project a reality, including all those who helped with fundraising down through the years and the local landowners who had been “very helpful”. He also paid tribute to the late Biddy Alymer who “could remember every house, every name of every field, every well” and who was very helpful in providing information about the history of the area when the Rambling House started up in 1986.

“Knockfierna is steeped in history, folklore and fairies,” he told the crowd that was packed into the Rambling House, located at the start of the new network of trails.

He recalled the tragic legacy of the famine of 1847 that is still visible in the partially restored houses along the route. “People were working out here on this hill in 1847, picking up stones, clad in rags, starving, for one sixteenth of a penny a day.”

In total, three miles of pathways around the hillside have been opened, taking visitors past a number of partially restored famine cottages, potato ridges dating back to famine times and other sites of interest. And, with Knockfierna being the highest point in the centre of county Limerick, the views from the top are spectacular, taking in five counties from the Shannon Estuary to MacGillycuddy’s Reeks in Kerry to the hills of Tipperary and north Cork.

After taking a tour of the new trails with Mr O’Donovan, Minister Deenihan officially launched the new Knockfierna Guide and reopened the walkways at a reception in the Rambling House where refreshments and entertainment were provided by local people.

“I am delighted to see so many people from the local community and the surrounding area to remember the victims of this tragic time in our history - it is truly a mark of great respect,” he said.

“The Great Irish Famine was truly a tragic time in our history and cannot be compared to any other event in our history. Sadly, Knockfierna was one of the areas which suffered greatly during this time and today’s ceremony will be a fitting tribute to those who suffered, died or were forced to emigrate during this time.

“The famine had a huge impact economically, socially, culturally and demographically on Irish society, evidence of which can be seen today. In this context the Knockfierna Guide is a superb publication which documents many of these complicated themes and narratives on An Gorta Mór and contributes greatly to our knowledge of this dark period, especially here in the community of West Limerick.

“I would like to thank the community in Knockfierna for putting so much work into ensuring that the victims of the famine in Knockfierna and its surrounding area and indeed all famine victims are remembered in a special way here.”

Minister Deenihan paid special tribute to Mr O’Donovan and the other committee members for “the sterling work done on the site since 1986”.

“That you have achieved so much without any state assistance is testament to your commitment and hard work in preserving this unique landscape which is central to our history and heritage,” he added.

Knockfierna became a refuge for many evicted families who moved to its upper slopes between 1830 and 1845. As a result, it became heavily populated, with a total population of over 600 people and some 123 houses at its peak. However, this population was devastated with the arrival of the famine and by 1901 it had declined to just 91 people in 26 houses.

The new guide gives a full description of the area including the location of the pre-famine houses, the potato ridges - or lazybeds - from that time, the mass rock, the pre-famine walls and a number of other ancient sites located on the hillside including forts, dolmens, cromlechs and cairns.

“You have here a great treasure and a unique landscape and your work in preserving the original walkways has been quite extraordinary.

“When one considers all the wonderful features and attractions here in Knockfierna, one begins to realise that you have a unique treasure incorporating the pre-famine village, the prehistoric monuments and the unique flora and fauna,” said Minister Deenihan.

Having earlier given a rendition of the song My Father’s House - which he dedicated to the “father” of the Rambling House, Mr O’Donovan - the cathaoirleach of Limerick County Council, Cllr John Sheahan, praised the work that was done in restoring the walkways. “It is the tie with the famine that really makes Knockfierna unique,” he said.

Fine Gael TD Patrick O’Donovan suggested that Knockfierna would be an appropriate site for the annual famine commemoration. “Based on the history that is up here, the Department of Arts, Heritage and the Gaeltacht might consider Knockfierna for the Munster commemoration of the famine,” he said.