Food enthusiasts to descend on Ballyhoura 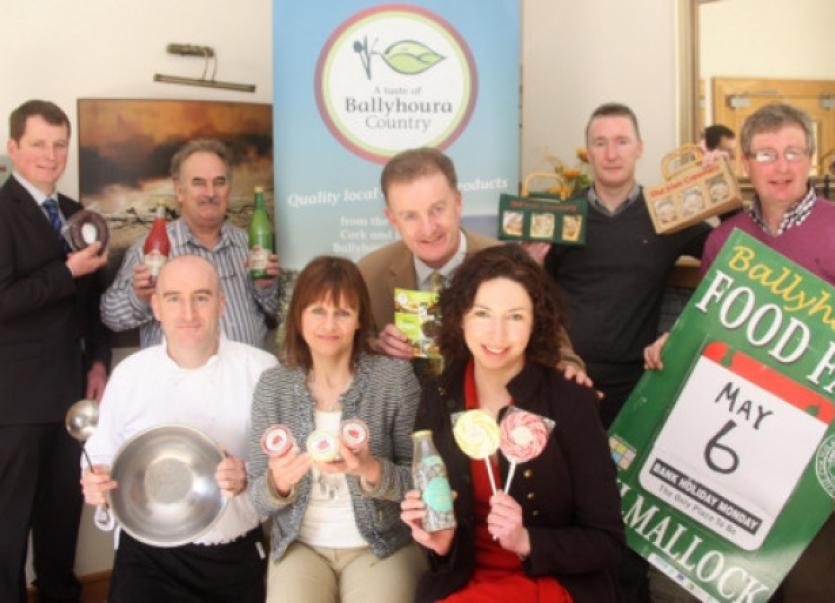 FOOD enthusiasts hoping to add some spice to their meals are being urged to attend the May Bank Holiday food fair in Kilmallock where they will be treated to a number of live cookery demonstrations featuring the best produce the Ballyhoura region has to offer.

FOOD enthusiasts hoping to add some spice to their meals are being urged to attend the May Bank Holiday food fair in Kilmallock where they will be treated to a number of live cookery demonstrations featuring the best produce the Ballyhoura region has to offer.

‘Craftisan food group, A Taste of Ballyhoura Country’, will celebrate its first birthday on Monday, May 6 when all members will gather at the Ballyhoura Food Fair.

Apple juices, beer, hams, cheese, sausages, sweets and compote will all be tried and tested by master chef, Shane Donohoe, of Recipe4Success cookery school who will lead the cookery demonstrations.

The demonstrations will take place on the hour from 11am to 2pm, inclusive.

“I will start at 11 with a hot and spicy melt dish – so lots of sausages and ham and we are going to use the chilli cheddar on top so we are going to make it really nice. Nicola is going to do a lemon posset with some fruit compote. In the afternoon we will repeat the same two recipes again,” Shane explained.

Tim Madden of A Taste of Ballyhoura Country said the new brand signifies all that is good about local Irish produce.

“With a firm emphasis on quality, these food products are already individually recognised for their uniqueness, traceability and use of the finest raw materials,” he explained.

“We’re using the word ‘craftisan’ to describe the produce as it has connotations of skill, imagination and a hands-on artisan approach. We are calling on every man, woman and child in this country to support these local businesses as they are the lifeblood of several rural communities and can hold their own on the national and international stages in terms of quality.”

While the initial pilot project involves seven producers, according to Tim there is scope to include additional artisan or ‘craftisan’ food producers.

A Taste of Ballyhoura Country is an initiative spearheaded by Ballyhoura Development Ltd, the local development company covering North Cork and South and East Limerick.

The Ballyhoura Food Fair in Kilmallock takes place every Bank Holiday Monday. Now in its third year, the food fair is growing from strength to strength.

Based at Annacotty Business Park, Recipe4Success cookery school has been operating for six months.

“It’s going great,” said Shane, “The whole area of cooking is something people won’t scrimp on. Because they are not going into restaurants as much, people want to learn to cook. Last night, I had 13 primary school teachers in for a cookery demonstration. We are a little bit different in that when people come here from work, they don’t sit down and wait 40 to 45 minutes for somebody to demonstrate a dish before they get to try it - we feed you when you arrive. That is working really well.”

For more details on Ballyhoura Food Fair or to download a free recipe book, see www.tasteofballyhouracountry.com.