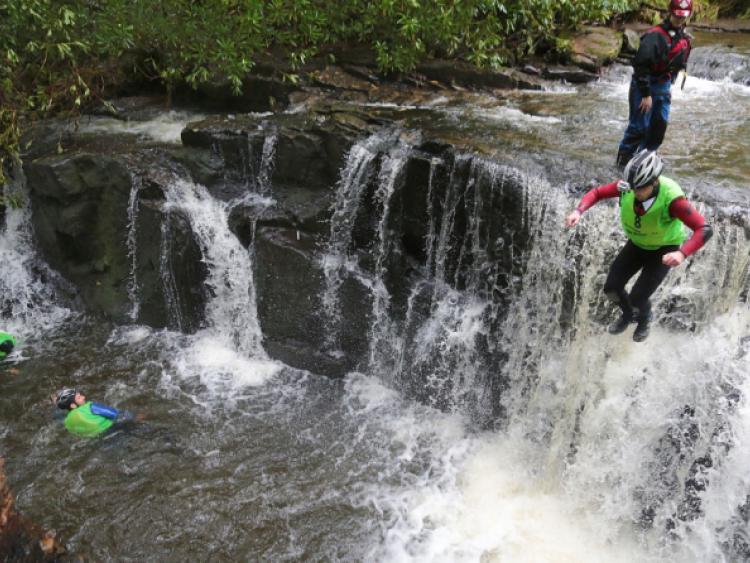 A GRUELLING 40-hour non-stop adventure race saw 28 teams from Ireland and abroad take part in daring tasks over the weekend including kayaking by night using the light from glow sticks and the moon.

A GRUELLING 40-hour non-stop adventure race saw 28 teams from Ireland and abroad take part in daring tasks over the weekend including kayaking by night using the light from glow sticks and the moon.

The Beast of Ballyhoura is a team event comprising a mix of men and women with the goal being to be the first team to get all four members across the finish line together.

“It was a roaring success,” said Fergal Somers, manager of Ballyhoura Failte. “The bus left Castletownroche at midnight on Friday and finished at 6pm on Sunday.”

Teams ran, mountain biked, kayaked, abseiled, orienteering, climbed and night navigated over a period of 40 hours non-stop covering over 400km on a predetermined route through the lowlands and uplands of Limerick, Tipperary, and Cork. Teams had to navigate the best route and determine the optimum level of equipment, food and pace to win. “There were 28 teams with four on each team. All teams were mixed,” Fergal explained. “We had seven international teams and the feedback from them was that they can’t wait to come back because we are hosting the European finals in 2015. Next year, it is going to extend to 72 hours and we would be expecting over 50 international teams.”

Over the course of the weekend, the teams cycled around Sliabh Feidhlim and did canyoning in the Clare Glens where they were tutored on orienteering and navigation skills. They kayaked from Golden in County Tipperary down as far as Cahir. “That was done at night-time. They used glow sticks and the moon for lighting. A team from the Czech Republic were the first to pass the finish line. The goodwill and reception we received from all the communities and landowners was tremendous and thanks to all those who marshalled. Everybody who worked at it over the weekend was a volunteer,” said Fergal.