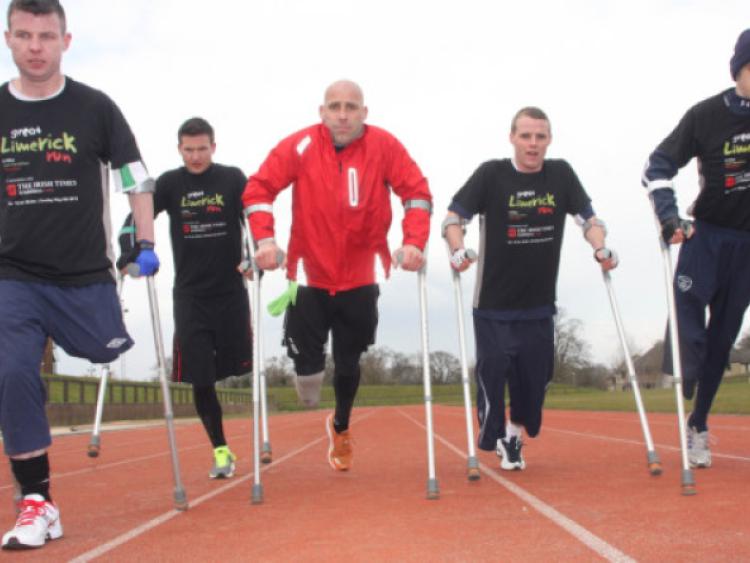 WORLD record breaking amputee athlete Simon Baker will be leading a team of men in another record-breaking pursuit this May for the Barringtons Hospital Great Limerick Run.

WORLD record breaking amputee athlete Simon Baker will be leading a team of men in another record-breaking pursuit this May for the Barringtons Hospital Great Limerick Run.

Simon is training a team of local and national amputee athletes to run their first 10km in the relay race - on crutches.

The final relay marathon team has yet to be decided, but the fastest four out of 18 trainees at present will be chosen.

“We’re doing this because we want to get rid of the disability label and be seen as serious sports people. “We’re serious athletes, not just amputees. We’re not out to walk the route - we want to showcase who are we,” Simon told the Limerick Leader, which is sponsoring the GLR relay event.

Simon made the Guinness Book of World Records for the fastest marathon completed on crutches and one leg, which he set in the Dublin Marathon in 2008 in a time of six hours 42 minutes.

With his name firmly in the history books, he said his aim now is to promote sports and activity for amputees, and also to provide any person with an amputation, congenital deficiency, or other limb affecting disorder the opportunity to access Amputee Football at grassroots, club and national level.

A 10km event will be held in the coming weeks to determine the four fastest men on crutches. Those who are unlucky not to make the team will be taking part in the 10k race, he said.

“The biggest hurdles most of them found was trying to convince passersby that stopped them in the street that they were not mad nor did they need a lift, but were out training for the Great Limerick Run marathon relay. I suppose it’s not every day you see someone skipping down the road at speed on a pair of crutches, with one leg, pumping with sweat. Most of these players would not have dreamt a few months ago that they would run a mile,” he said.

Their entry to the Barringtons Hospital Great Limerick Run is to raise funds for an Amputee Football tournament, which they will host in Limerick on August 9-11. The Paddypowers.com Amputee Cup will see England, Poland, Netherlands, Germany and Belgium against Ireland. Over 100 amputee footballers will descend on UL for two days of high tempo football.