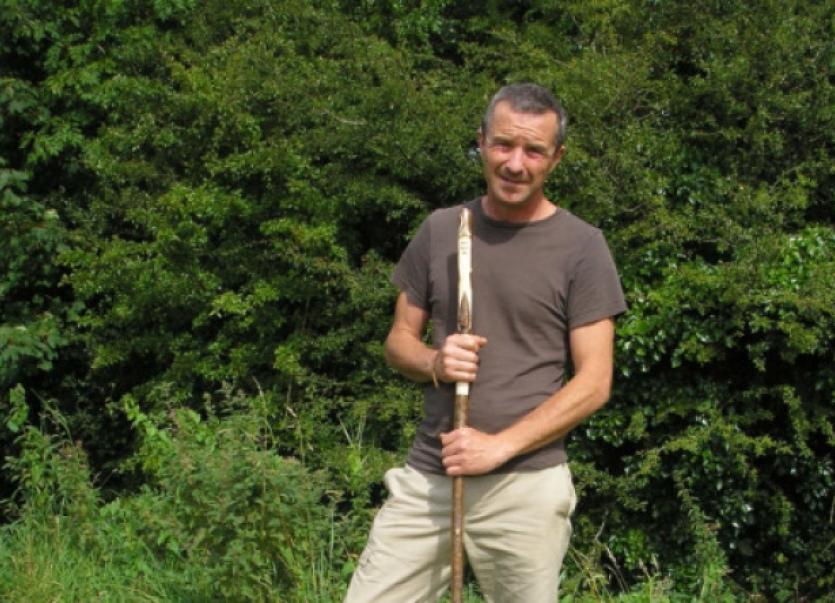 A Limerick man who set up a business creating unique carved walking sticks is to have his products featured on a new RTE television series this summer.

A Limerick man who set up a business creating unique carved walking sticks is to have his products featured on a new RTE television series this summer.

Will Fogarty, from Ballinvreena, has been commissioned to create a series of one-off hiking staffs to mark each of four historic Irish walks which will be undertaken for the programme.

Each week, a different presenter will take part in a trek as part of the series which is due to be aired on RTE1 every Sunday evening throughout July.

Will was contacted by the producer of the programme who saw his staffs at a market last year.

“Having seen my work in a Christmas market in Cork, the producer of the programme, Peter Mulryan, approached me in January about carving a hiking staff for each walk. Each one had to be based on the historical aspect of the walk and would be made for the presenter using it,” Will explained.

Having his work featured on national television should prove a boost to Will’s business, which he started following the decline of his construction firm some years ago.

“I was in the building industry all my life and had a company with my brother. However, due to the times we live in, this became impossible to continue and so I had to come up with a new plan,” he said.

“I do a lot of hill-walking and hiking and I always used a wooden staff on the walks. I decided to see if I could carve a more interesting and unique stick and quickly realised that I had found something I loved. This was how I started and have progressed to opening my own business.”

Operating under the business name Fear na Coillte, Will carves his designs into hazel sticks which he sources in the nearby Ballyhoura hills. Hazel has, for thousands of years, been used as walking sticks because of its strength.

His intricate carvings depict faces, wildlife and other designs. He also personalises pieces with names or dates, if requested.

More recently, will has begun to create large pieces, using chainsaw carving methods. “The bigger pieces are created by working with the shapes and contours in the wood. All my work evolves through the creative process until the spirit of the wood comes through.”

Will has joined forces with two other local craftspeople - Tonya Clifford, who makes hand-made dolls under the name Tir na nOg, and Mike Clifford, who is an artist.

By combining their resources, they can showcase their work, while also retaining their own identities.