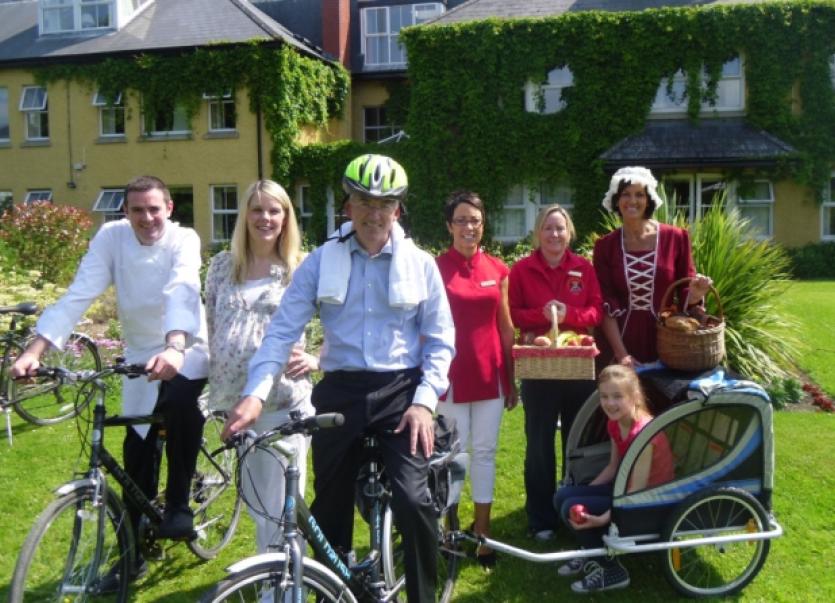 THE Dunraven Arms Hotel in Adare has become the first hotel in the region to offer a made-to-measure cycling package along the Great Southern Trail. (GST).

THE Dunraven Arms Hotel in Adare has become the first hotel in the region to offer a made-to-measure cycling package along the Great Southern Trail. (GST).

The package, which is aimed at families but can be tweaked for adults only, includes bed and breakfast for two nights, one dinner and bike hire along with transfers to and from the trail.

The trail currently begins at the Palatine Museum in Rathkeale and runs for 40 kilometres through Ardagh, Newcastle West, Templeglantine and Abbeyfeale as far as Kilmorna on the Kerry border.

Speaking at the launch of the new package, Liam O’Mahony, chairman of the Great Southern Trail said it was a vote of confidence in the trail which had taken 20 years to develop to its current state. “ I would like to congratulate Louis Murphy and the hotel staff for their innovative package,” Mr O’Mahony said. “ It is wonderful that the Dunraven Arms Hotel realises the potential of the GST as a means of attracting tourism to the area.We have 40km of the GST open for walkers and cyclists”.

He added that he hoped the initiative would be followed by other hotels and accommodation providers along the route. “It’s a wonderful, safe way to see the Limerick countryside,” he urged.

And he also hoped that the trail will soon be extended along the full 90-kilometre length of the old rail route to Tralee through Listowel.

The trail will feature on Radio Kerry this Saturday on Frank Lewis’s programme from 9-11am. The programme was recorded last weekend with twenty people making contributions at eight different locations along the route. These contributions cover many different aspects of life along the trail, including the flora and fauna as well as the history of the different areas.

The contributions are interpersed with poems and songs.