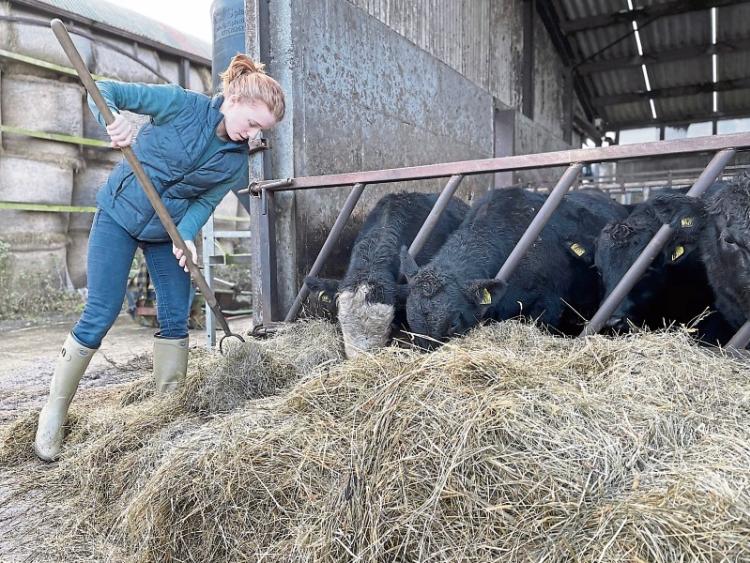 FARMING was traditionally seen as a “man’s world” but thankfully that is changing.

Just turned 25, Méabh is policy officer and executive secretary to both ICMSA’s livestock committee and the farm and rural affairs committee.

She graduated with a Bachelor of Agricultural Science from UCD in 2018 having completed a semester in Iowa State University on their world renowned Animal Science Program. She was a Teagasc Walsh Scholar and completed her Masters in Agricultural Extension and Innovation. Her dissertation title was “An investigation into pathways for non-replacement dairy calves and attitudes of stakeholders in the Limerick area”.

“I don’t think at university level there is a massive difference in the ratio, not in my degree course anyway. In saying that, for my Masters, I was the only girl in my class, but I know that’s not the norm. At Ag College level there seems to be more girls coming in too.

“I think female role models are essential. Thankfully, in my work experience I got to work closely with female advisors and got to see the respect they were treated with. Farmers trusted their knowledge and spoke very highly of them. Seeing the respect that they were given shows the changes that are happening. There is still room for improvement, and I do think that, to an extent, women still have to prove themselves before being taken seriously. But every experience a farmer has with a strong capable woman in agriculture improves that perception and changes the mindset,” said Méabh.

She hopes that any girl in school considering going into agriculture would have the opportunity to work with strong female role models.

Méabh describes farming as “a calling”.

“You need a passion for the industry and for farming. It doesn’t matter what age or gender you are. Anyone with a grá for agriculture should be welcomed. Those are the people we need: helping farmers, helping the animals, improving the industry for the next generation. My father told me that at the UCD Open Day there was one quote that stuck in his head: “We do not inherit the earth from our ancestors, we borrow it from our children”. I think that’s the critical thing to grasp, especially in the age of climate action.”

Méabh’s “calling” began as a little girl on the family farm bought by her great-grandfather on her dad’s side in Ballyiston, Shanagolden. The daughter of Ann and Brendan was never a child to sit still for too long.

“My mother tells stories of my numerous escape missions where I’d always be found down the farm looking for my dad or grandparents. I spent more time in the tractor with my dad, it was the only time I sat down for more than two minutes!

“In fairness, dad never pushed farming on us and only ever asked for help when he needed it. Looking back, I think we all have the same memories; most families bond on holidays or playing board games. We bonded running around the fields after escapee calves or tagging them. While I think I inherited the love for farming, both my brothers (Adrian and Cillian) enjoy helping out and I think we all find a bit of calm and mindfulness working on the farm. Bit of manual labour does great things to clear the mind.”

The Dore’s have around 40 suckler cows, mainly Angus crosses with a few pedigree animals.

“We started off with dairy crosses and have been breeding our own replacements so every year we get more and more angus. It’s 7/8th angus at this stage. As we’re part time farmers, we have a low input system. Cows calves outside in March with minimal intervention. Years ago, we used calve indoors, but there was awful hassle with calf health. This system works for us and has minimized our use of scour treatments etc. In the last few years all the calves have gotten is a vitamin E boost as the area is deficient and - if needed - they get a parasite dose before housing. I think we have it very close to nature at this point, the cow size works with our bulls. This year was the first year of our home-bred bull being let off with the main herd.

“The farm is at a low stocking rate, in a limestone area, so - aside from slurry – there’s no fertilizer used. The grass grown matches our demands. The farm is extensive and I’d hope that it’s set up to help boost local wildlife and improve the public perception that farming and nature can coexist. We have a fairy fort on the farm which is a habitat with an abundance of wildlife.”

Méabh always wanted to work with animals, apart from a short stint at 8 where she was going to be a ballerina.

“From the age of 10, I wanted to be a vet. I grabbed every opportunity to get work experience with animals with the local vet or even being a groom in stables. I knew whatever I was going to do, it was going to be surrounded by animals. The decision to go for UCD Ag Science came after a meeting with a career guidance counsellor. The choice seemed to boil down to working with sick animals all the time or working with farmers to help prevent problems in the first place. Looked at that way the decision was a no-brainer.

“I did Ag Science for my Leaving Cert and my teacher was always very supportive of my decision to go into agriculture. I think that as a 17-year-old girl, that was important. There seems to be a good bit of discouragement from some schools when it comes to students expressing an interest in farming and I think the support I got was the start of the positive role models that have helped me along the way.”

As already mentioned, Méabh has more qualifications than most farmers have pairs of wellingtons.

“In the bizarre year it was, and mindful of how difficult it has been, I was thankful for the distraction of my thesis. I didn’t have time to go and socialise, so I think it helped focus me to work harder. From finishing my thesis and finishing up with my last commitments of the programme. I only had four days off before I started my new role in ICMSA. It all happened so fast.”

Her dissertation called “An investigation into pathways for non-replacement dairy calves and attitudes of stakeholders in the Limerick area” is hugely important and becoming more so.

Méabh thinks the main conclusion is the need for dairy beef integration.

“The dairy industry needs outlets for their calves, and with the challenges around live exports - not to mention the implications from Brexit - I think that young calves will need to be reared in Ireland. The dairy farmer needs to understand that the value for him in improving his beef breeding isn’t a higher calf price but a route to market. It is fundamental to the dairy sector that the beef sector can take the calves.

“I think if calf quality improves and there’s a good selection, it would also encourage farmers to convert to dairy beef systems. The animals are being produced and there is an environmental advantage over suckler beef. If we can encourage farmers to see the benefits to dairy beef and facilitate the building of relationships between dairy and beef farmers, I think that would go long way to improve calf markets. That’s one of ICMSA’s main focuses for next year and the Department of Agriculture will launch a pilot scheme in line with our lobbying.

“I think the big thing is to realise that there is no ‘Silver Bullet’ solution: it’s an accumulation of small changes designed to get better farmer margins all on a sustainable basis. We absolutely need to encourage co-operation in a positive way and to build the relationship between the beef and dairy sector and we most definitely can’t allow the two sectors to be played off against each other for the benefit of non-farming interests.”

Méabh’s visit to Iowa State University and their world-renowned Animal Science Program was one of the highlights of her degree.

“I would recommend anyone with a similar opportunity to go. Ireland is so small, and our agricultural systems are so different to the rest of the world. I also think that in the Irish context I was surrounded by peers with similar views and backgrounds in my course. So moving away and having to make friends with people who are so different helped me realise how important it is to hear contrasting views and learn to see the world from another perspective. Even getting to experience a different approach to higher education. From their grading systems, to the learning and teaching styles used. I think we could take on some of their approaches to improve the system we have.

“In terms of agriculture, the first day of class I was standing talking with a group and they were discussing a ‘small farm’ up the road. After about 10 minutes it came out this small farmer was 300 acres plus. The scale of farms over there and how organised the land is was something I don’t think I was prepared for. I had the opportunity to go skydiving and saw the landscape and grids of maize grown. It was nothing like Ireland’s rolling hills and hedgerows, just flat as far as the eye could see.”

Since starting with ICMSA in September, Méabh says every day is different.

“It’s so different to what I’ve done before so there’s a learning curve. But everyone, from the staff in the office to the farmers we work with, are all game to help me learn the ropes. I think the confidence they have in me as well as the support is important when you’re starting out. It helps set you up to do your best, and to give you the confidence to stand up and speak your mind when you need to. The more I do, the more I’m learning about this side of the sector. I hope that as I grow in knowledge I can be of more use to farmers and help them anyway I can. I want to ensure that the future of farming allows for farmers to continue doing what they love and that the environmental compromises we will all have to make are not just at the expense of farmers.”

Future of farming is in safe hands with young people like Méabh involved.