Ready to cut: A strange silage season starts in the county Limerick 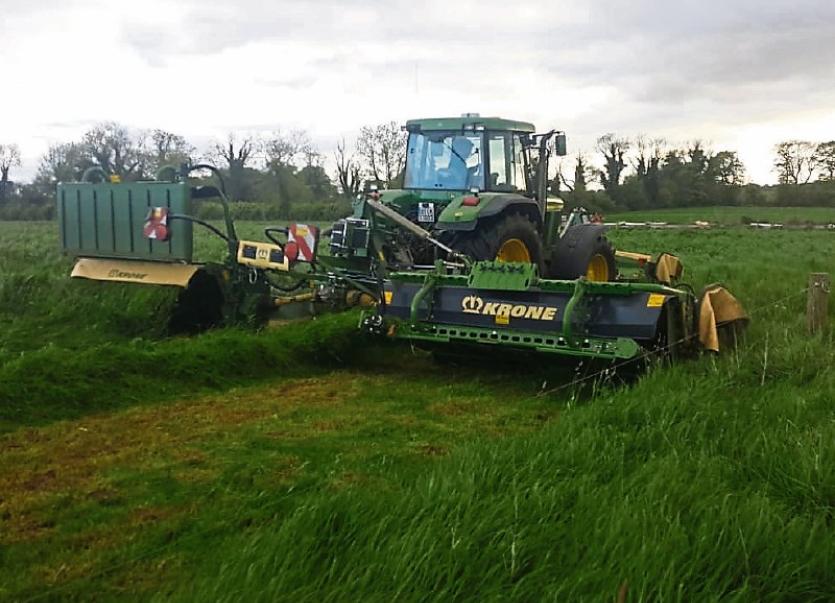 Mr Sheehy, a former chairman of Farm and Forestry Contractors in Ireland (FCI) who remains on the national executive, said early to mid-May is when they normally begin to motor.

Many things stay the same but some are different this year due to Covid-19. A lovely part of country life is when the silage men are invited into farmers’ homes for food. The leaves of the table are pulled out to make it bigger, everyone sits down for a meal and a chat.

“It is a beautiful tradition and very much appreciated by us but for the last while we haven't been going into houses. We are still being offered food all the time and it is being brought out to us.

“We have no problem with that, it is just more awkward for the householder, farmer and their wives having to bring it outside, instead of just turning around and putting it on the table,” said Mr Sheehy. Apart from that it is pretty much business as usual.

“No passengers are allowed which is nearly gone anyway, giving children a drive - that is going to be a no no. Everyone has to watch what they are doing and be mindful of the situation we are in. We all have to do our bit,” said Mr Sheehy.

Speaking on Sunday, Mr Sheehy said he had two jobs done but this week it is going to “kick off”. Despite the lack of rain, he says there are fine crops.

“They are no worse or no better than you would be expecting at this time of the year. There are fine returns, fine crops. Even though we haven’t had rain in the short term, we had plenty of it in the long term!” laughed Mr Sheehy. Hopefully, the drought of 2018 won’t be repeated.

Getting drivers has been hard-going in recent years but Covid-19 has sadly changed that.

“There has been a lot more enquiries, lads dropping in their names to say they are available,” confirmed Mr Sheehy, whose new Claas 870 harvester will be taking to the roads and fields. One advantage will be the quieter roads.

“It will definitely make a difference although the roads aren’t as quiet as they were a month ago but still road users have to be aware we are going to be out the next couple of months.

“We will do all we can to accommodate them but we expect the same in return. We will pull in when we can but people need to be mindful that we could be coming around the bend on narrow roads,” said Mr Sheehy.

As the Bruree man alluded to, the FCI is particularly concerned about the risk to children on farms this year.

FCI national chairman Richard White said most children are off school due to the Covid-19 restrictions and the arrival of the silage contractor can provide some excitement for them, in what can be an otherwise boring time.

“We are urging all farm families to pay particular attention to child safety on farms over the coming weeks. We are urging farm families not to allow children into silage fields when the harvesting is taking place, from the time of mowing onwards.

“We are appealing to them to keep children at a safe distance away from the silage pit as trailers unload and the process of building the silage clamp begins. The risks are simply too great,” said Mr White.