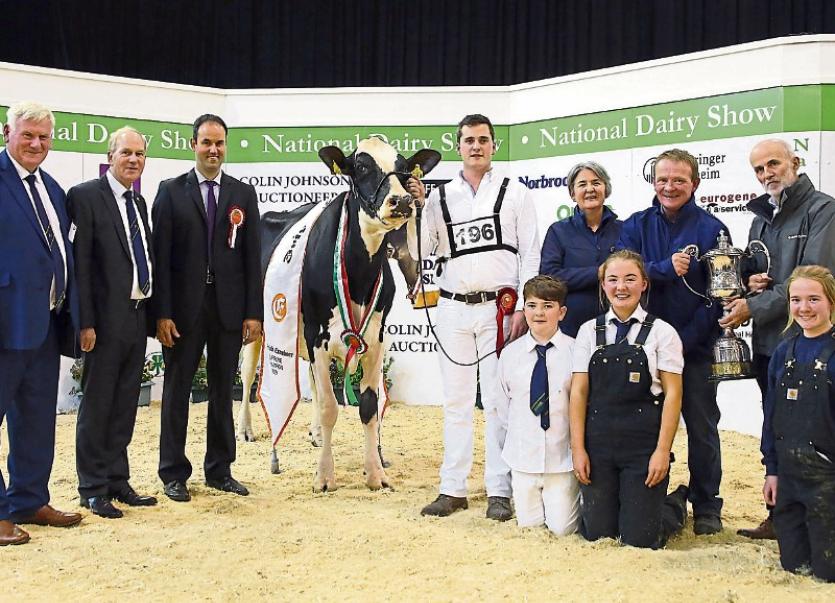 THE LIMERICK hurlers couldn’t quite go back-to-back but Limerick farmers could.

The whole family - Paul and Eileen and their children Jane, Claire and Bill - were in the Green Glens Arena, Millstreet to celebrate the success.

The Limerick domination continued in the Junior Holstein Championship. The champion Chapelhill Sidekick Roxy and reserve Baldonnel Doorman Supra are owned by Tadhg Bourke, Kilfinny, while honourable mention went to Donal Neville’s Emerald Perseus Fran. Mr Hannan said it was a “great show for Limerick. We got five out of the top six. It is not bad going!”

Mr Hannan and his family are still on a high following Lisnalty Megasire Ritue being announced as champion champion.

“A serious cheer went up when she got it. It was just unbelievable. We really enjoyed it,” said Mr Hannan.

It is his first National Dairy Show Supreme Champion and he follows in the footsteps of his late and great father Jimmy, who won two.

Mr Hannan said she is “the best cow I’ve had in 20 years” and he has had a lot of very good ones.

“She has a magnificent udder giving 13 gallons of milk. She isn’t the biggest cow in Ireland but she is very, very correct. She is a dairy machine. She is an angel around the place, she is as quiet a cow as you will find.

“Last year, she was the heifer in milk champion. She came back again,  calved in 11 months and went out and won the senior championship. You can’t ask for better than that,” said Mr Hannan.

Coincidentally, RTE’s Big Week on the Farm came down to the Hannans’ six weeks ago to film a cow being calved and it was Lisnalty Megasire Ritue.

“She was destined to win it,” smiled Mr Hannan.