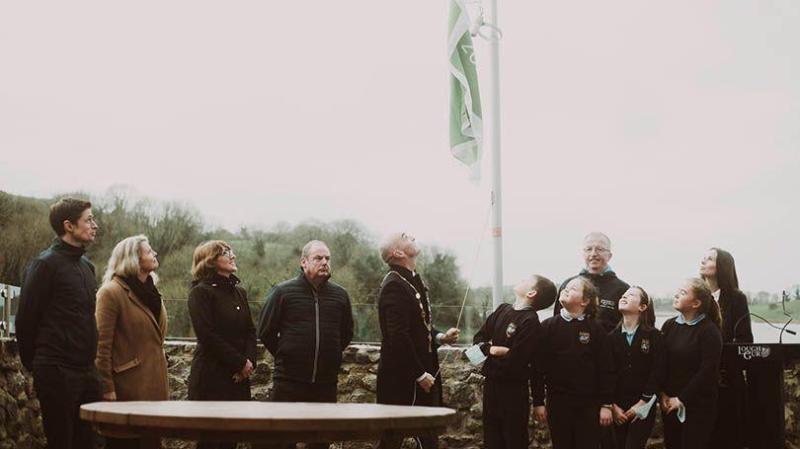 Mayor of the City and County of Limerick, Cllr Danie Butler, at the flag-raising ceremony in Lough Gur

THREE public parks at locations across Limerick have been awarded Green Flags by An Taisce Environmental Education.

Green Flags have been awarded to Páirc Cois Féile in Abbeyfeale; The People's Park in Limerick city and Lough Gur Lakeshore Park and Visitor Centre.

International accreditation for public park excellence in Ireland has increased this year, to reach over 100 accredited public green spaces across the country. A total 84 of Green Flag have been awarded to public sites while 19 have been awarded to volunteer-run community sites such as in Abbeyfeale.

The Green Flag award is applied for each year to monitor progress and ongoing improvements. Assessment criteria include visible evidence of management in the areas of marketing and communication, a warm welcoming approach, heritage and biodiversity and community involvement.

Mayor of the City and County of Limerick, Cllr Daniel Butler who formally raised the Green Flag over Lough Gur said: “Local authorities willingly apply for a Green Flag Award knowing that from the day the park is nominated it sets an international standard for maintaining and operating the park as a public facility for all Limerick citizens to enjoy. The award not only signals the exceptional work that they have done to date but also their commitment to maintaining standards year on year.”

Carmel Lynch, Senior Engineer for Limerick City and County Council with responsibility for Recreation says the importance of public parks has become increasingly important since March 2019.

"The pandemic saw a return to these public spaces on a scale that was not experienced previously. We welcome this increased enjoyment of public parks and have worked to improve how people enjoy these spaces," she said.

What a day! The Mayor raised the first ever Green Flag Award over Lough Gur. The award was granted in recognition of Lough Gur's exceptional public park standards and commitment to continuous improvement. https://t.co/lGFkisuolU @LimerickCouncil @Limerick_Leader @Live95fmNews pic.twitter.com/MFv12UA1xb