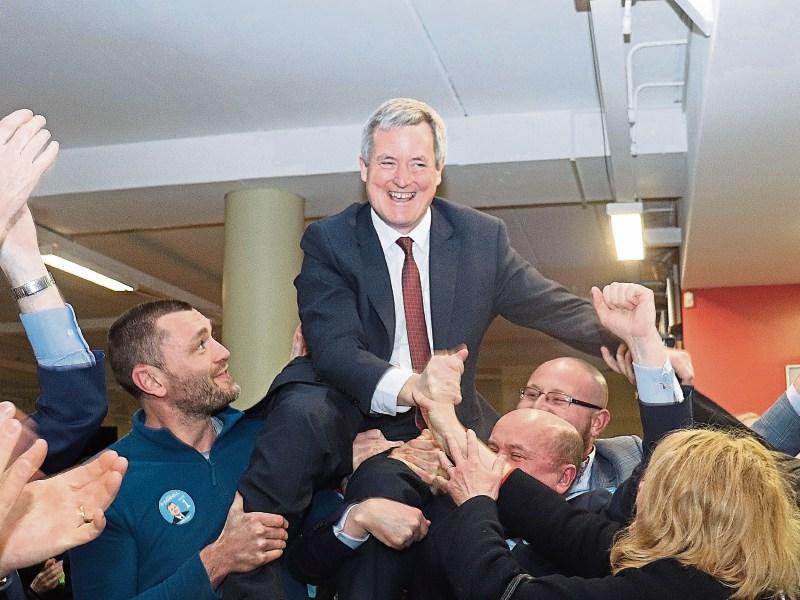 FOUR years after losing his Dáil seat, Fine Gael’s Kieran O’Donnell has reclaimed the title of TD, and has said he feels “privileged” to have done so.

The Limerick city candidate received 14.3% of first preference votes at the polls on February 8, and was elected on the eighth count this Monday at Limerick Racecourse.

The elimination of fellow Fine Gael candidate Maria Byrne in the previous count was fundamental to Kieran’s election, as 60% of her second preferences went directly to the Monaleen man.  “I was delighted with the transfers,” Kieran told the Limerick Leader, “Maria and I both ran in order to get the best possible result for the party, that’s the key thing. She was a very good candidate.

“I feel so privileged to have been chosen to represent Limerick city and its surrounding areas including north Tipperary,” he added.

“Many of my colleagues and fellow party candidates lost seats across the county, there’s been huge shift nationally and Fine Gael now have to sit back and reflect on the message that’s been sent to us by the electorate across the country.

“We need to be as conscious as ever of what the people want, and the demand is clear - they want affordable housing, pension amendment and childcare cost control. We must reflect on this as a party.”

Regarding Fine Gael party leader and Taoiseach Leo Varadkar’s surprising election on the fifth count in his constituency, Kieran said: “I was concentrating entirely on Limerick during the count.

“I was confident when the first preferences came in, we started pulling strong transfers then. It was a slow count.”

Kieran received 39 of poll topper Maurice Quinlivan’s second preference votes, and 206 from Aontú’s Michael Ryan after his elimination just before the fourth count.

With just a week to go until the 33rd Dáil officially meets for the first time, Kieran has said he will be demanding that the 60-bed block is immediately seen to as a “fundamental matter of urgency.”

“In addition, I will be looking into the provision of garda station in areas such as Castletroy and Dooradoyle, it’s something I’m going to be pushing strongly for.”

He has pledged to deliver specific projects to these areas, including the development of an Educate Together school, an extension to Monaleen National School, as well as an additional National School in the Monaleen area.

He also has plans to push the M20, as well as an improved public transport network for Limerick city.

Kieran was an unsuccessful candidate at the 2002 Seanad election, and was elected on his first attempt to Limerick County Council for the Castleconnell electoral area in 2004.

He was elected to represent Limerick East in Dáil Éireann in 2007, a position he held until 2011 when he served the Limerick City constituency. This seat was lost to Jan O’Sullivan in 2016, and was soon elected to the Seanad where he sat on the Cultural and Educational Panel and was the FG spokesperson for finance.