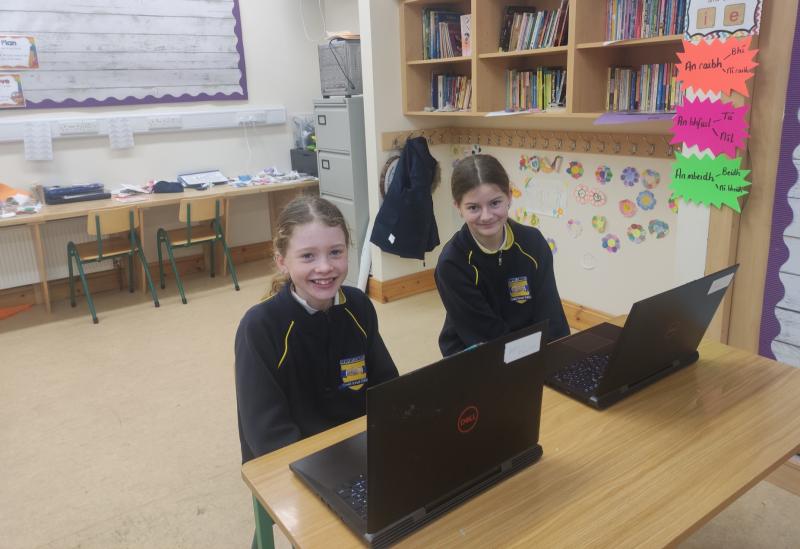 Olivia Clarke and Jade Sambrook, two 6th class students in the Convent of Mercy, Newport, will be taking part in a new maths initiative aimed at equipping students with 21st century digital and maths

A LIMERICK primary school teacher has secured seed funding as part of an initiative to add excitement to maths teaching within the county.

Castletroy native, Conor Griffin, now a teacher in Newport, Tipperary, was one of 60 entrants into the Social Entrepreneurs Ireland Ideas Academy.

“I spotted an opportunity to improve things. This would give children an opportunity not only to learn maths in a fun way but also to learn some digital skills,” he told the Limerick Leader.

The project, Virtown, works whereby the entire class builds a simulated town  and links it to another constructed by a different class.

Conor’s project, which was launched by his company Edlinks, a Limerick based company looking to develop educational technology, was one of 13 projects to share a pot of €50,000 in seed funding.

So far, the pilot project has been run in the Convent of Mercy Newport, where he works and will be trialed in four other Limerick primary schools.

“The seed funding we received will hopefully help us in developing the software a little bit further for the project,” he added.

Several investors offered insightful feedback to Conor and took a keen interest in the development of the project.

They pointed out the possibility of linking with a third level institute in Limerick, which is something Conor is eager to put in place.

“We will be looking at Software As A Service (SAAS), where schools pay an annual fee and have access to the software. This is our plan to develop a sustainable business model and one of the judges wants to work with us on this,” Conor informed.

He added that the confidence of the judges and the availability  of seed funding will help push the project forward, with the hope of rolling out to further schools in Limerick for a trial basis of six sessions per school.

“Children will benefit as they will get to do maths in a real-world context.

“What I said in the pitch is that you rarely do a long multiplication sum for fun, you usually do it as something else, whether that’s planning a holiday or building an extension on a house.

“I would hope that more principals in Limerick reach out to get involved. Our company is very proud of our Limerick roots and are eager to contribute to the city moving forward,” he concluded.