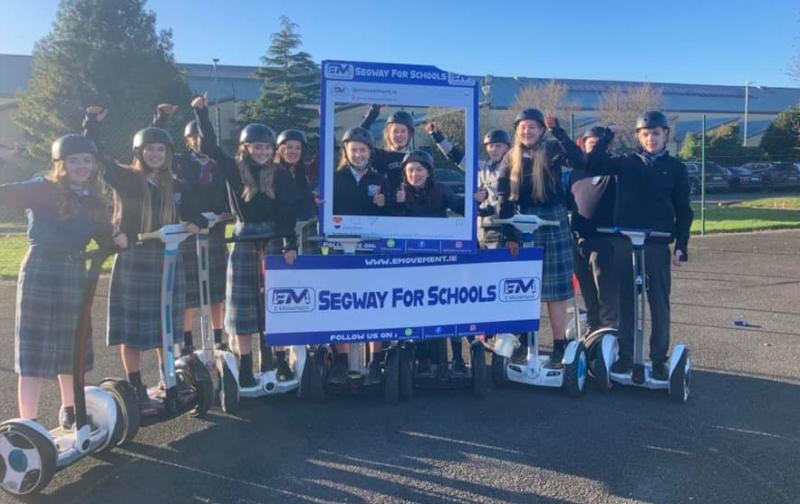 LIMERICK students were mesmerised as members of the student body whizzed through the corridors on electric powered vehicles.

The workshop, which was organised for TY students at Coláiste na Trócaire in Rathkeale, forms part of a wider series of “practical” life lessons.

“They would have been very cautious at the start when they got on, but five minutes later it was like they were on them all their life,” TY Co-ordinator and organiser Killian Phair told the Limerick Leader.

Facilitated by instructors from Kilkenny based company Emovement, 37 students were divided into three separate groups as they toured their Segways around the West Limerick school.

Different courses were set up around the grounds, involving stopping and starting and various turning movements. Students also had to complete an obstacle course set up, weaving in and out of poles at different angles.

Mr Phair, a teacher in the school, added “the last group chanced their arm by asking me could they go up the corridors of the school.

“We made it so that they could go up quietly past the classrooms and see what the reaction was like. The other students knew that the workshop was on but didn’t expect to see them coming up the corridor.”

The aim of the workshops for students that sit between state examination cycles, is to maximise utility and help them as they make their way through life.

Mr Phair explained that so far, the group have completed workshops in driver education which even included lessons on how to change the tyre of a car.

Students also participated in a concussion workshop in conjunction with researchers at GMIT as well as a barista course. A hairdressing workshop is set to take place in the new year.

“It’s all about being practical and adding variety. They are all a bit different to the normal workshops that are run in TY,” he concluded.