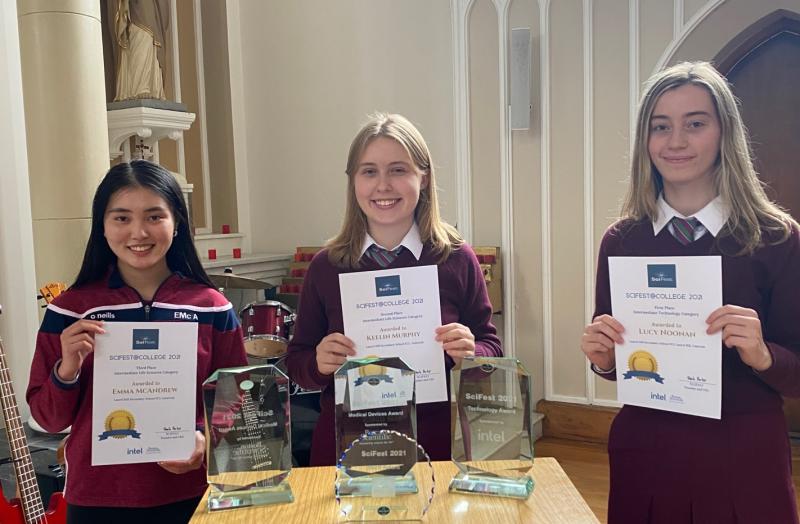 FOUR students from a secondary school in Limerick city have won awards at the LIT Moylish SciFest 2021.

Lucy Noonan and Joanna Ryan were the winners of The Boston Scientific Medical Devices Award, Intel Technology Award and they were also awarded first place in the Technology Category.

The students created their own splint design for their project after they were inspired by family members who suffer from CMT.

Emma McAndrew was a runner up in the same category and has also been named a SciFest National finalist.

Her project was titled 'Comparing the efficacy of Natural, Honey-based wound dressings to Synthetic Wound dressings'.

This project analyzed the effectiveness of natural honey based wound dressings to synthetic wound dressings, such as Iodine (Inadine) or Silver (Acticoat) for infected wounds.

Finally Keelin Murphy was given the the SciFest Merit Award and second place in the Life Sciences Category.

Her project looked at 'The Disproportionate Nature of the Gender Gap in Irish Politics'.

The aim of Keelin's project was to understand why there is a gender gap in Irish politics and how can we encourage more females to get involved.

For her research she contacted political parties and interviewed them about female representation within the party.

The fundamental aim of these interviews was to understand if there was an organised approach being taken by their political party to reduce the gender gap in Irish politics.

Keelin interviewed members of Sinn Féin, Fianna Fáil, the Green Party and the Labour Party for her research as part of the project.