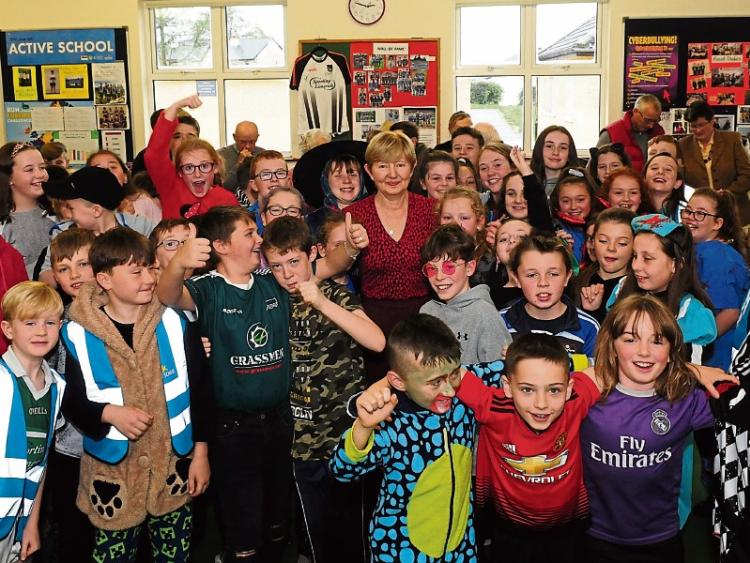 FOR the last 38 years Mary Butler had been bringing a bag of copy books home for correction from Murroe National School.

It was all part of a days work for Mary who has retired after almost four decades in the school. Ms Butler, from Cappamore, has taught from junior infants up to fifth class.

“She has been a great example to all of us teachers here in Scoil Mhuire, Murroe as Mary has always been a hard-working, conscientious teacher devoted to the needs of her pupils,” said Principal, Marie Griffin.

“She has maintained the same enthusiasm for developing interesting, engaging lessons for her pupils and was never without her bag of copies being brought home for correction,” said Ms Griffin.

Ms Butler moved in to the role of special education teacher in 2017 and applied herself with the same energy and enthusiasm. She undertook professional development in summer, evening and on-line courses for that important teaching position.

“Mary developed and co-ordinated literacy and the English school plan. She promoted our participation in World Book Day events and organised book fairs which generated funds for books for class libraries. Mary had worked on our ICT plan and led the introduction of our interactive white boards, our laptops and more recently the tablets.

Ms Butler’s passion extended outside the classroom too.

“Mary developed our PE plan. She has led the school’s involvement with the Active Flag initiative and has achieved two Active Flags. When we achieved our first Active Flag we were only the second school in County Limerick to achieve the flag.

“Mary has put a huge amount of work in to our third flag and we have been notified that we have passed the application process and will have the accreditation day after the mid-term. Following that we expect to have our third Active Flag.

“Mary, along with Anne O’Connor, trained our girls teams in camogie and Gaelic football for Cumann na mBunscol competitions.

“Mary has always been involved with charity work. She initiated our involvement with the Christmas Shoebox Appeal. She has supported and shown great friendship and kindness to all her colleagues. Mary was an inspirational teacher,” summed up Ms Griffin.

As Ms Butler starts the next chapter in her life, Ms Griffin wishec her a very long and very happy retirement from all in Scoil Mhuire, Murroe and “many, many thanks”.