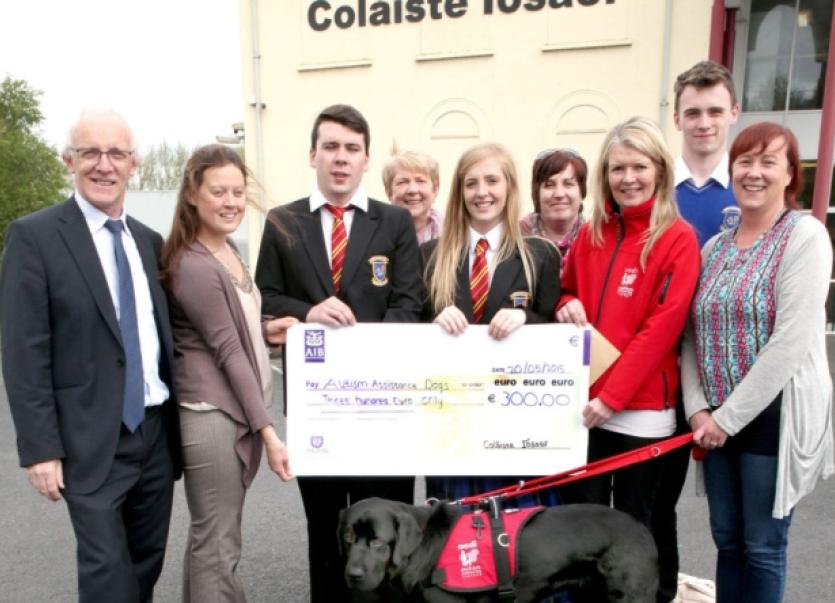 STUDENTS and teachers in Coláiste Iósaef, Kilmallock have helped raise awareness about autism and how long it can take to get a life changing assistance dog.

STUDENTS and teachers in Coláiste Iósaef, Kilmallock have helped raise awareness about autism and how long it can take to get a life changing assistance dog.

Currently due to demand there is a six-year wait for a trained canine and that is if you can even get on Autism Assistance Dogs Ireland’s list. Nuala Geraghty, from the charity, visited the school last week to collect a cheque from a stationary shop run in the school by the head boy and girl.

Keith O’Brien and Shannon Lewis set it up with the help of deputy principal John Cooke. It opened two days a week and they were always on hand if a pupil forgot their pencil case or refill pad.

While it was non-profit making at the end of term they were €300 in the black.

They decided to donate it to a charity and one is very close to Shannon’s heart.

“They asked us did we have any ideas and I said I had an interest in autism because I have two brothers with autism. So we picked Autism Assistance Dogs Ireland. They fully supported that. They said they didn’t know much about it so it would be nice to raise awareness,” said Shannon.

“We applied for a dog but the waiting list was so long that we got our own dog and we saw the difference an untrained dog could have. It is a six years wait and Nuala from Autism Assistance Dogs Ireland said they have actually closed the waiting list because it is so big,” said Shannon, who is busy studying for her Leaving Cert. Instead, they bought a Jack Russell called Max.

“They love him, They are crazy about him. It is the way they look at the dog and interact with him. They have a very special bond with the dog. It helps their communication and social skills. It has made a massive difference to them,” said Shannon, whose mum and dad are Estelle and John.

Nuala, who brought along an autism assistance dog to the school, thanked Keith and Shannon and everyone in the school for their generous cheque.

John said the whole school was very proud of the work of Shannon and Keith. The deputy principal said the new idea of the head boy and girl having a focus for the year proved a great success.

“They do a lot during the year as it is but this allowed them to be creative and they enjoyed it immensely,” said John. As well as raising money, raising awareness about autism was equally as important.

“We are looking at contacting Nuala again to speak to a class in September and do a whole project around it,” said John.