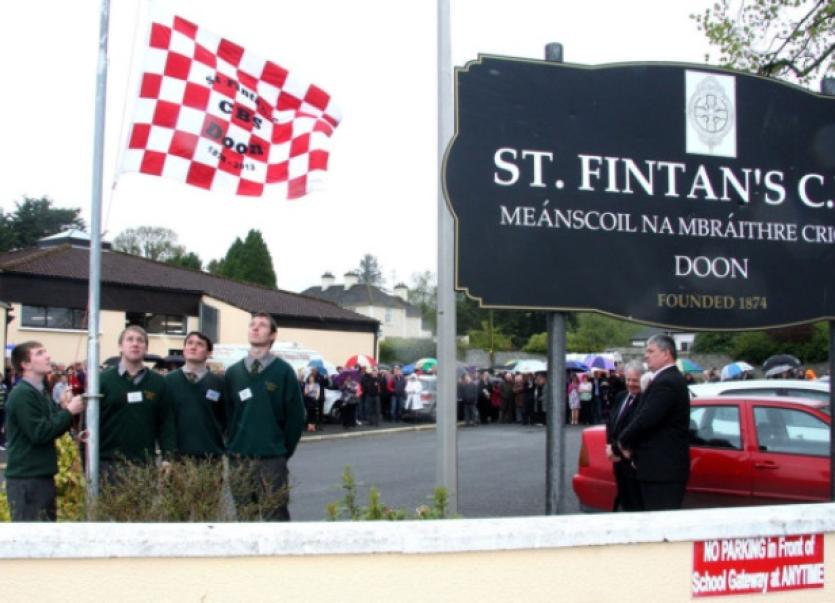 NOW that Doon’s new secondary school - Scoil na Trionoide Naofa - is open, no time has been wasted in amalgamating the village’s primary schools.

NOW that Doon’s new secondary school - Scoil na Trionoide Naofa - is open, no time has been wasted in amalgamating the village’s primary schools.

In a letter sent out to parents seen by the Limerick Leader, the Edmund Rice Schools Trust (ERST) sets out its plans.

“The Department of Education agreed to build a new secondary school on a greenfield site. It was further agreed on completion of the secondary level amalgamation that the two primary schools would amalgamate and this new amalgamated primary would be set up in St Fintan’s Secondary School building,” continued Ms O’Brien.

Speaking to Limerick Leader, she says it is very early days in the joining together of Doon CBS and Convent National Schools.

“The respective trusts will also be represented on the committee. An independent chairperson will be agreed by the trustees,” wrote Ms O’Brien to parents.

While Scoil na Trionoide Naofa was being built the school was operating on a split site in St Fintan’s and St Joseph’s. But now that St Fintan’s is empty it is not as simple as unlocking the door and turning on the lights.

“The department has to do a technical assessment, then they have to decide what needs to be done to upgrade the building.

“As you can imagine it is a secondary school building but a primary building has to have certain specifications for primary classrooms - sinks in each room, integrated toilets, size of each classroom.

“You can’t just walk in the door and say there you are now of you go,” said Ms O’Brien.

As ERST own the building it has been made available for the primary amalgamation.

“We are doing our very, very, best that the children in Doon get a high quality education into the future - the best education that can be provided because they have a beautiful new secondary school.

“So if the secondary school has amalgamated in a new building then we try and match it with the primary,” said Ms O’Brien.

As it is just the beginning of the process there is no definite date for when the halls and classrooms of St Fintan’s building will be alive to the sound of pupils and teachers again.

“We will try and get it over the line with everybody on board as quickly and expedited as best as possible,” said Ms O’Brien, who finished by saying it is good news for Doon.

“We appreciate all the help we got from the local people there, they are wonderful people in Doon,” she concluded.