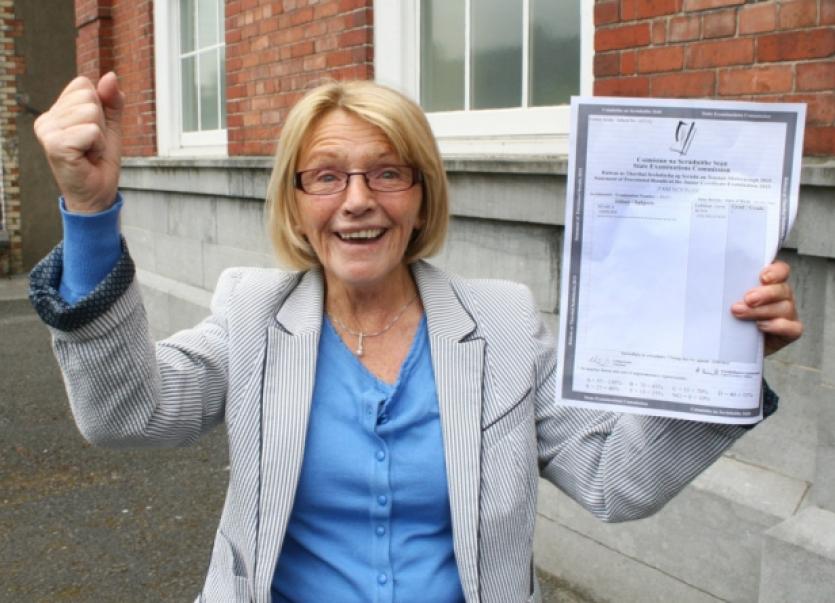 AGE has not limits, according to 71-year-old Pam Noonan who felt “on top of the world” as she walked out of the Limerick City Adult Education Service with her successful Junior Cert results.

AGE has not limits, according to 71-year-old Pam Noonan who felt “on top of the world” as she walked out of the Limerick City Adult Education Service with her successful Junior Cert results.

The O’Malley Park woman, who started last year studying for June’s English papers, said that passing the Junior Cert was “one of the biggest achievements” in her life.

“It’s like a dream come true, that is exactly what it feels like. I just cannot believe that I have achieved this, that I have come from so low to so high. And I am not finished there — I am going on,” she told the Limerick Leader, just minutes after she opened the envelope to her results.

Pam said it was a daunting experience for her returning to school, as it had been more than 60 years since she sat in a classroom, admitting “I barely knew how to write my name” when leaving school at 11-years-old.

She praised the teachers for their “cooperation, working with the students and especially with the elderly student.

“The teachers were fantastic. It must be very hard for a young teacher to get in there and try and teach someone and bring their mind back. You definitely would have forgotten a lot of work, which I had never learned, but to bring your mind back to that level again and your memory, they were fantastic. They had a lot of patience. Each of them were fantastic,” she said.

Though she was nervous on the day of results, she said that her family and friends were full of support and encouragement.

“My family, one million percent, I love them to bits. Without them I was lost, and they were fantastic. They stood behind me all the way. They pushed me, ‘Mam, go! Mam, go!’ and that’s what I got out of them.

“When I got the results, I wanted everyone to be around me. I didn’t mind — I wanted the world to know,” she enthused on Wednesday morning.

She said that her next goal is to pursue her Leaving Cert.

“Hopefully I will do the Leaving Cert, depending on what the teachers think at the end of next term. I am dedicated enough. I would love to do it.

“I am encouraging all those elderly people that are sitting at home, watching television, to get out there and do more. There would be less of them in homes if they got out there and worked like I have been doing, and many like me.”

For full coverage of the Junior Results across Limerick, see this week’s broadsheet editions - out on Thursday!