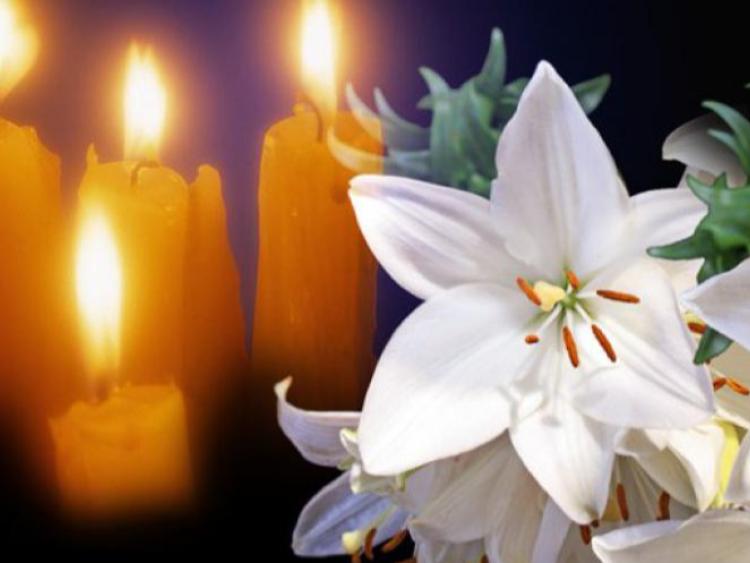 The death has occurred of John Stokes, Cabinteely Dublin 18, formerly Pallasgreen,  and late of Clery’s Dublin.

Peacefully, in the tender care of all the staff in the Annabeg Nursing Home, John, beloved husband of the late Peggy, loving father of Margaret, Sean, Tom, Liz and Padraig; Sadly missed by his children, sons-in-law, daughters-in-law, his 11 grandchildren, great-grandson, his brother Nicolus, sisters-in-law, nieces, nephews, former carers, extended family, neighbours and a wide circle of friends. May he rest in peace.

Peacefully. at St John's Hospital. Survived by his family circle, kind neighbours and his large circle of friends. May he rest in peace.

The funeral cortege will pass through Delmege Park, Moyross, en route to the Cemetery, on Wednesday, April 22, at approximately 1.30pm, for those wishing to pay their respects to Mick, while adhering to the current Covid–19 recommendations with respect to social distancing. May he rest in peace.

The death has occurred of Liam Mackessy, Barnagh, Newcastle West.

Survived by his nieces Valerie, Fortune and Marie, nephews Liam and Eamon, sister-in-law Ronnie Mackessy, relatives and friends. May he rest in peace.

The death has occurred of Denis Fitzgerald, Glensharrold, Athea.

Peacefully, in the wonderful care of the staff of Roseville Nursing Home. Beloved wife of the late John. Dearly loved mother of Ray and the late Johnny Boy. Sadly missed by her loving daughter-in-law Colleen, grandchildren Lorraine, John, Ruth, nephews, nieces, extended family and friends. May she rest in peace.

Although all other arrangements will be private, her funeral cortege will pass both family homes on Sheelin Road, Caherdavin on Tuesday, April 21, at 2pm. May she rest in peace.