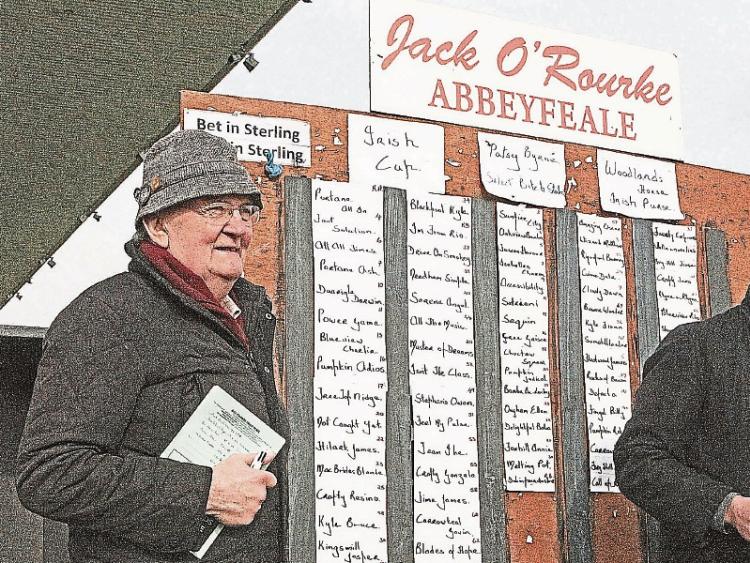 Jack O'Rourke keeping an eye on the action at the Irish Cup Coursing meet in 2016 Picture: Dave Gaynor

THE death has occurred of well-known Abbeyfeale publican and sporting enthusiast Jack O’Rourke after a long illness.

Mr O’Rourke, died peacefully at Milford Care Centre this Monday, surrounded by his wife, sons and daughter. He was 68.

Jack was one of Abbeyfeale’s best-known citizens and his pub, in the Square, was a focal point for all those with a sporting bent: rugby, soccer, horse-racing and coursing enthusiasts all made their way there.

For a number of years, Jack also had a betting shop nearby.

An extremely likeable and sociable man, Jack was passionate about horses, greyhounds and rugby. He played college rugby with Castleknock and with his local Abbeyfeale club.

For three decades, he was secretary of Abbeyfeale Coursing Club and thoroughly enjoyed the club’s two-day meeting just after Christmas every year. He also served a term as president of the Irish Coursing Club.

He was a regular at race meetings around the country and made the pilgrimage to Cheltenham for many years.

Jack was also a vocal presence in the Limerick Vintners Association.

His remains will repose at Harnett’s Funeral Home in Abbeyfeale this Tuesday from 4pm and removal to the Church of the Assumption will take place at 8pm. A Requiem Mass will take place at 11am this Wednesday and will be followed by cremation at The Island Crematorium in Co Cork.

He is mourned by his wife Angela, daughter Jackie, sons Jamie, Tiernan, Garett, Ronan and Peter and Jackie, by his brothers Jim and Conor, sisters Marie and Ann, his eight grandchildren, extended family and a large circle of friends.