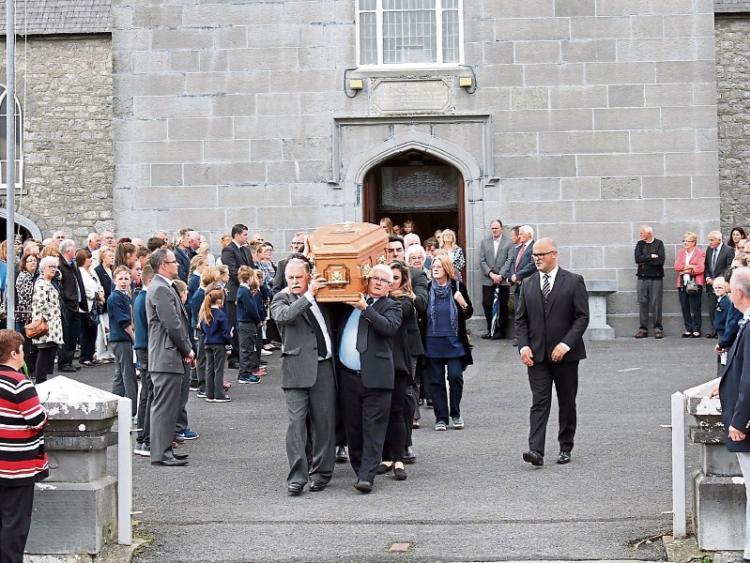 THE funeral has taken place of the late John Nestor, vice-principal of Patrickswell National School, who passed away suddenly last Thursday.

Mr Nestor, the longest-serving teacher at Patrickswell NS, was laid to rest this Monday afternoon in his native Askeaton.

Tributes are being paid to the popular vice-principal, whose sudden death at aged 56 has shocked both communities in which he was deeply involved. Schoolchildren provided a guard of honour for their teacher as the coffin exited the church.

“He was an extremely popular and well-respected member of the staff - a very genial man altogether,” said Joe Lyons, INTO spokesperson for Limerick and principal of neighbouring Ballybrown NS.

“He taught in Patrickswell for about the last 35 years. I think he started around 1982, he was in Mary I for three years before that. He was synonymous with Patrickswell school,” said Mr Lyons of his fellow INTO member.

“He was someone who was the first person into the school in the morning. He knew every person, he knew every child, and he took great interest in them. He was a constant presence in the school,” added Mr Lyons.

Patrickswell GAA club said it was “saddened” to learn of his death, and it temporarily suspended all club activity as a mark of respect.

A book of condolences  was opened at Patrickswell NS on Friday evening, and locals showed up to share memories of their late teacher.

The school’s blogspot page thanked the “huge numbers” of people who signed the book in memory of their “esteemed colleague”.

“I was struck on Friday, with the number of people who came in. There was a very steady stream of people for the entire time the school was open,” said Mr Lyons.

“People came in and talked about their memories of John, as a teacher and as a person. They were all very sad, and they all had fond memories of him. He would definitely be well into teaching the second generation without a shadow of a doubt,” he added.

He will also be greatly missed by pupils and colleagues from Patrickswell National School, including principal Ciaran Crowe, who has taught alongside him for many years.