Big Feile win for one of Limerick’s smallest schools 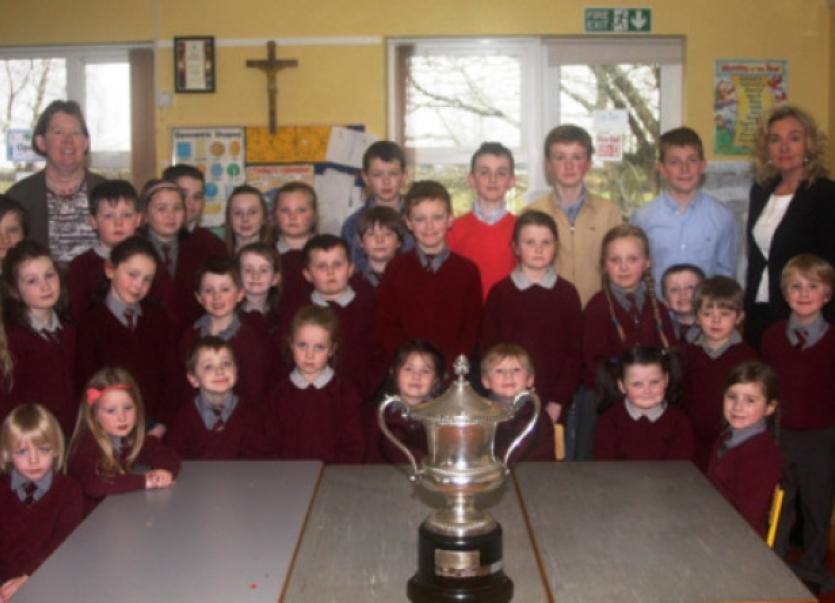 Located in Ballysimon, it is one of the county’s smallest schools with 36 pupils and two teachers.

But like the bible story they are taught about David and Goliath, the pupils have proved that the underdog can come out on top.

In their first time ever entering Feile Luimni they won the senior trophy in the Irish drama section and got a highly commended in the younger group.

Proud principal Maria Anketell, one of two class teachers, said one of the pupils told her the win was the “best day of her life”.

“I know it is a cliché to say but it is the taking part that counts,” said Ms Anketell.

When she brought up the idea months ago the boys and girls weren’t too sure.

“They felt out of their depth with their Irish but we plugged away and it got to the stage that their level was really high,” said Ms Anketell. The nine boy and girls from third to sixth class wrote and acted in their own comedy sketch featuring the likes of Father Ted and Mrs Doyle.

Despite being a fraction of the size of some of the schools they were up against they brought home the top prize.

“It is the size of the FA Cup!” smiled Ms Anketell, who thanked her fellow teacher Mary Dillon, SNA Noreen Liddy, secretary Anne Berkery, parents council and board of management for their support. With talk of smaller schools being closed and amalgamated, Ms Anketell stresses all that smaller schools have to offer.

At one stage their numbers were in the early twenties but they had 11 enrol in junior infants in September - the biggest ever in their history.

“Just because we are small it doesn’t mean children don’t have the same opportunities,” said Ms Anketell, who lists off sports, musical drama, artist in residence programme and more.

“It is a very tight knit community. The grandparents of some of our pupils were taught here too and they get involved.

“There is a real family atmosphere in the school. The older children look out for the younger ones. They do shared reading,which is something that works really well.

“It builds up confidence of the older ones and the younger ones love it when their peers are teaching them and helping them,” added Ms Anketell.