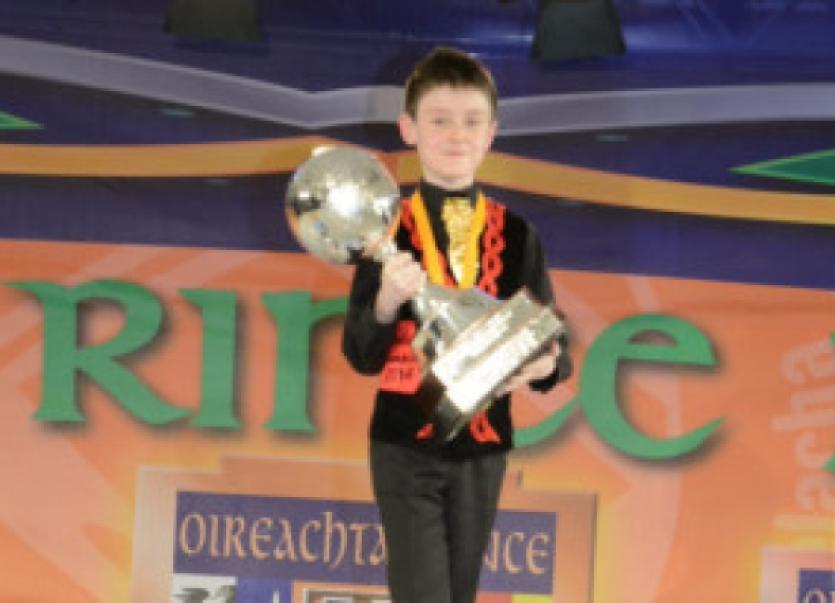 A TEN-year-old County Limerick boy says he felt “on top of the world” after he was crowned world champion at the 44th Irish Dancing Championships in London.

A TEN-year-old County Limerick boy says he felt “on top of the world” after he was crowned world champion at the 44th Irish Dancing Championships in London.

Billed as the “Olympics” of Irish dancing, more than 5,000 competitors battled it out to be crowned champions, with up to 15,000 more attending the eight-day event at the London Hilton Metropole.

“When I realised I had won, I couldn’t believe it. It was a dream come true and I felt on top of the world,” said Ronan who is a student of Scoil Uí Ruairc, The O’Rourke School of Irish Dancing, which have venues in Limerick and Clare.

Ronan was crowned the world champion in the Under 11 age category. “This is the first stage that you can compete in the World Championships,” said his proud mother Jacqueline who attended the championships with Ronan’s sister Megan, 18.

The World Championships was hosted by An Coimisiún le Rincí Gaelacha (The Irish Dancing Commission) and began with an opening ceremony attended by world famous dancer, Michael Flatley

Mayor of London, Boris Johnson, said the event is a “vital boost to London’s economy”. Throughout the eight days of competition, dancers competed in solo, ceilí, choreography and dance drama categories in a variety of age groups.

Despite the big occasion, the ultra cool Ronan - who is a fourth class student at Scoil Mocheallog in Kilmallock - says he doesn’t get too nervous when he performs. “I don’t because when I start dancing I forget about everything and everyone and just enjoy it.”

While he said it’s nice to win, “being told that I was the best dancer is far more important to me”.

At the World Championships in London, Ronan, as the youngest world champion, was also invited to perform for the Irish ambassador at the Irish Embassy. This was an evening of Irish dance, music, and language which celebrated the role of the Irish in London.

Ronan was also invited to display his fancy footwork for a TV documentary which will air on Sky later in the year.

The documentary will showcase All-Ireland and world champion dancers from around the globe.

“Ronan loves to dance, he is dedicated and passionate, and he is a pleasure to teach. In the past few years he has had both great success and great opportunities through Irish dance, winning many competitions, but also delighting audiences at concerts throughout the country,” said his teacher Francis Ward, TCRG.