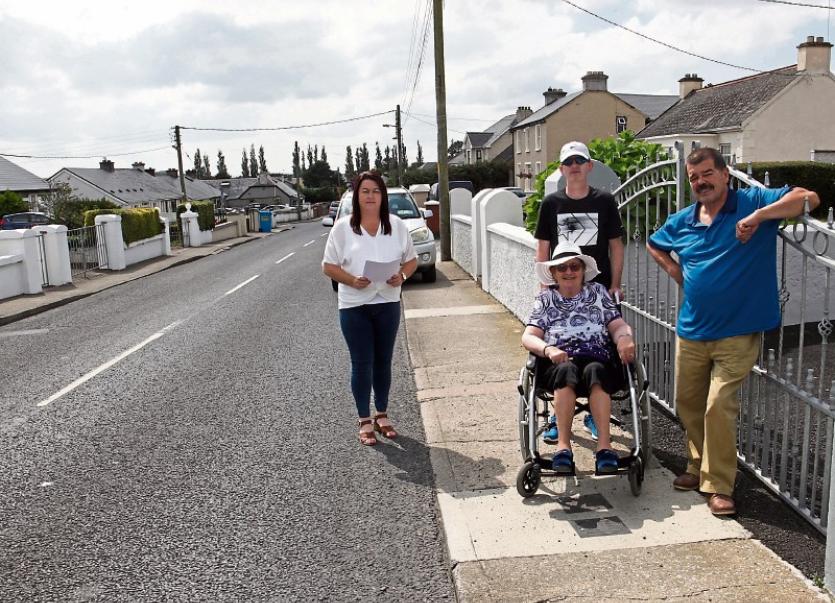 Dozens have signed a petition calling for more speed ramps to slow traffic before “someone is killed or seriously injured”.

Residents say motorists are using it as a “rat run” between the Dublin and Ballysimon Roads.

Mr Hannan said there are five speed ramps coming from the Dublin Road to the top of St Patrick’s Hill.

“That is sorting out the traffic but going down St Patrick’s Road it is like Monte Carlo. All we want is two speed ramps to save lives because someone is going to get seriously hurt or killed.

“It is going to happen. Then they will put the speed ramps in and it is too late then,” said Mr Hannan, a former Independent local election candidate.

Local resident, Vincent Coffey organised the petition which he has handed to Cllr Catherine Slattery.

“We are short one if not two speed ramps. They would slow the majority of cars down. There is a huge gap between the one at the top of St Patrick’s Road (entrance into Lynwood Park) and the one at the bottom where the traffic lights are.

“You have motorists using it as a rat run to get to the Dublin and Ballysimon roads and then you have local residents as well. There is a large volume of traffic passing through,” said Mr Coffey.

He is so concerned that when he and his mother go for walks he stands on the outside of her because he is afraid of an accident.

“It’s still very dangerous. Drivers of some cars are really putting their boot to the floor to make the traffic lights. I’m worried there could be a fatality if someone loses control of their car,” said Mr Coffey, who has got dozens of signatures on his petition.

Cllr Slattery said there is a lot of speeding going on.

“Not alone here in St Patrick’s Road but in roads and estates all over Limerick. It has gone out of control.

“St Patrick’s is a very narrow road with houses on each side. Most of the residents are elderly and a couple are wheelchair users. The paths are very narrow and the cars are flying past. If somebody, God forbid, tripped or anything and fell out on the road they are gone,” said Ms Slattery. The Fianna Fail councillor said there are two sets of ramps but about 100 metres between them.

“There was a ramp in the middle. It was taken out I’d say when the road was being resurfaced and never put back down. We have contacted the council in the past and they said they didn’t think there was a need to replace it.

But Vincent Coffey and Noel Hannan have contacted me on numerous occasions -  they are the ones living here and see exactly how fast cars are speeding,” said Ms Slattery, who adds that she will hand the petition into the council and follow up.