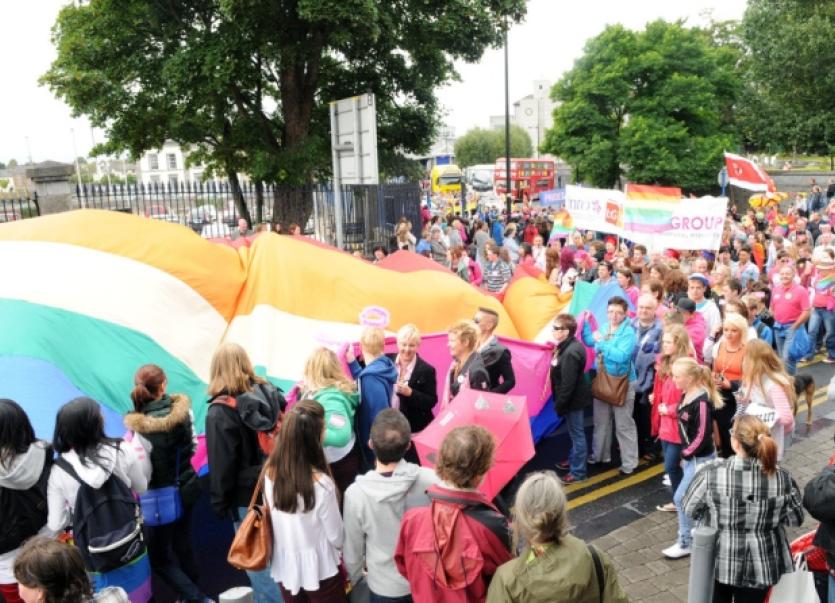 LIMERICK city councillor Maurice Quinlivan has said it is time more people in the city supported the Limerick pride parade.

LIMERICK city councillor Maurice Quinlivan has said it is time more people in the city supported the Limerick pride parade.

The Sinn Fein councillor joined 500 people in marching through the city centre on Saturday at Limerick’s annual Pride parade.

Although there was representation from Fianna Fail and the Socialist party, Cllr Quinlivan was the only elected politician to march.

He said: “It is about time people came out for this. Pride is a great event for the city. It shows we are moving on, they are progressive. Gay people are our brothers and sisters, and we have to support this.”

Despite rainy weather, the Pride parade brought Limerick to a standstill on Saturday afternoon.

There was representation from all sectors of society at the event, which was led by Mr Gay Limerick Donal Dalziel, Ms Gay Limerick Lisa Daly, and the first ever Alternative Ms Limerick, Miss Lillette Shannon banks.

Youngsters and adults alike had their faces painted, while there were several dance groups to add that bit more flair to the occasion.

However, the parade also carried a serious message, with participants asked to support the bid for marriage equality.

Others marched in solidarity with gay, lesbian and transgendered people in Russia, which has introduced draconian laws against homosexuality in recent months.

Festival PRO Evan Kennedy - who marched as his alter-ego Madonna Lucia in the parade - said he wants people to think of Limerick’s Annual Pride parade in the same manner as St Patrick’s Day.

“On Paddy’s Day, everyone picks up shamrocks. So in Pride, we say get out the rainbows and the unicorns, and show your support for equality. On that ground, it has been really successful,” he said.

It is hoped that by the next Limerick Pride, marriage equality will be on the cards.

“Marriage equality can be the cure for homophobia in this country,” he stated.