From Down Under to US, thousands visit castle 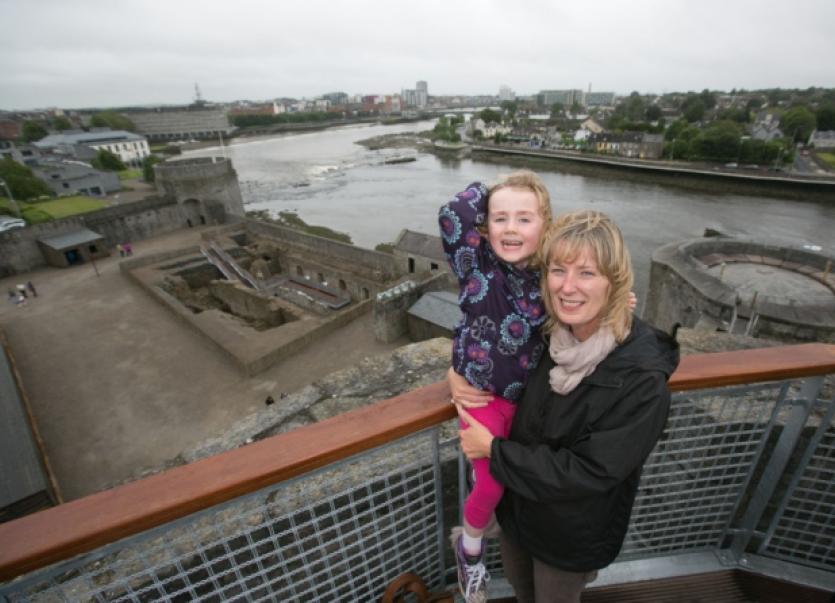 SIMON Spratt is standing in the place where his grandfather lived; in fact, three generations of his family grew up here. It was a rare privilege and a most unusual, even an iconic setting to grow up within these walls - of King John’s Castle.

SIMON Spratt is standing in the place where his grandfather lived; in fact, three generations of his family grew up here. It was a rare privilege and a most unusual, even an iconic setting to grow up within these walls - of King John’s Castle.

“This is authentic,” said Simon, as he kicked around the stones of the courtyard on Friday last, as the castle re-opened after a €5.7m redevelopment, and welcomed in close to 1,000 visitors from around the world on its very first day.

“You can smell and touch the wood, you can see the craft work that has gone in to it - it’s realistic,” he beams.

“The views are spectacular and it’ll only get better with some sunshine. It’s lovely to see people come in here and be surprised,” he said. Simon was one of a number of people who made submissions in relation to the plans in recent years, but today his fears were laid to rest.

“The original plans have been changed for the better, and that’s a real encouragement for engagement, because this is somewhere locals will want to visit and be proud of, and it’s very obvious you can be proud of it now.”

From the 1930s up to the 80s, families were housed within the grounds of the castle, until they were moved on to make away for a tourist attraction.

Simon’s mother Mary was another person pleased with its reincarnation as a focal point for tourists and locals alike.

“What I’d love to see is all the residents who are still alive and lived here meet back here again, and exchange what went on in those years. The oldest resident is 84 years and she’s still living locally. It would be great for The Gathering,” she said.

Garrett Donnelly, from Dublin, had a particularly keen interest in how the castle was redeveloped as he’s a museum designer in Tasmania.

“The use of actors and props is a really great addition. It’s my first time visiting here and it’s very impressive,” he said.

Also travelling from further afield were three young Australian tourists, whose first port call of call on a brief tour of Limerick was the castle, unaware it had just re-opened today.

“It’s terrific, just awesome. We don’t have anything like this back home,” said Tom Webb.

Mum Elaine Meyler from Shannon had her hands full, as Joshua, 12, Aaron, nine, and Jessica, aged four and a half, dressed up in costumes from the period.

“The old [castle] was good; this is fantastic. It’s very interactive, there’s not too much text on the walls. I’ve gone back to train as a teacher and I’d definitely encourage anyone from the teaching world to come here. We’ll be back again,” she said.

Tim Evans who acts as a blacksmith in the courtyard was taken aback by the high numbers of tourists visiting on this ‘soft day’. “I’m surprised there’s so many people here from all over the world on such a wet day. It’s great interacting with people and giving them some of the history of Limerick.”

Tourists from Britain, Italy, Spain, Scotland, Austria, as well as from Texas, Chicago, California, New Jersey and New York in the States were among those to visit on the first day. Those just living a stone’s throw away were also impressed. Betty McNamara, from Convent Street, said: “It’s fabulous. It’s great for the area, and hopefully Nicholas Street will be done up now too.”

Her brother, Jim McNamara, who was home from Canada to visit family, said it’s “great to see the old museum incorporated into the new facility. I was here in 1992 when they opened up the castle and I think this is much, much better. It’s living history.”

Betty added: “When I open up my window every morning and see this, you can take it for granted.”

There is a sense that few Limerick people will take it from granted now.