Flagbearing school celebrates on the double 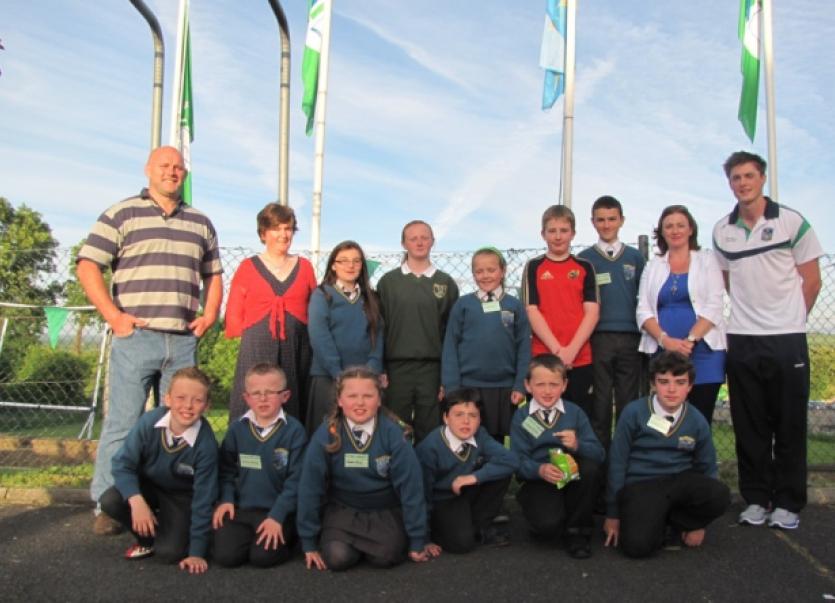 STAFF and pupils at Barna National School have broken for the summer but five flags waving in the breeze tell the story of a busy year.

STAFF and pupils at Barna National School have broken for the summer but five flags waving in the breeze tell the story of a busy year.

A big crowd of pupils, parents, staff, board of management and the community joined together to raise the school’s fourth Green Flag and their Active School Flag.

Rugby legend, John Hayes and Limerick hurling star, Gavin O’Mahony received a guard of honour as they joined in the celebrations. The fourth Green Flag is awarded by An Taisce for travel said principal, Sandra O’Dwyer.

“To achieve four Green Flags to date is a wonderful achievement, particularly for a small rural school such as Barna. A good deal of work and commitment goes into achieving each award but the hands on knowledge the children learn about their environment, both on a local and global level, is rewarding in itself as well as their increased sense of awareness and respect for the environment,” said Ms O’Dwyer.

The fourth Green Flag was a two year programme led by the school’s co-ordinator, Noreen Higgins along with the Green School committee made up of pupils from each class.

Initiatives included an action plan to reduce the amount of traffic going to the school. Walk, cycle, or park and stride to school were encouraged. WOW (Walk on Wednesdays) days and cycle safety programmes were also held.

“Working towards the Active School Flag has been a very enjoyable process and not just for the pupils, but for the staff and parents too. We’ve all become increasingly aware of the importance of keeping fit and healthy and the many benefits attached to being active, no matter what age you are,” said Ms O’Dwyer.

Barna is only one of eight schools in County Limerick to have achieved the Active School Flag to date.