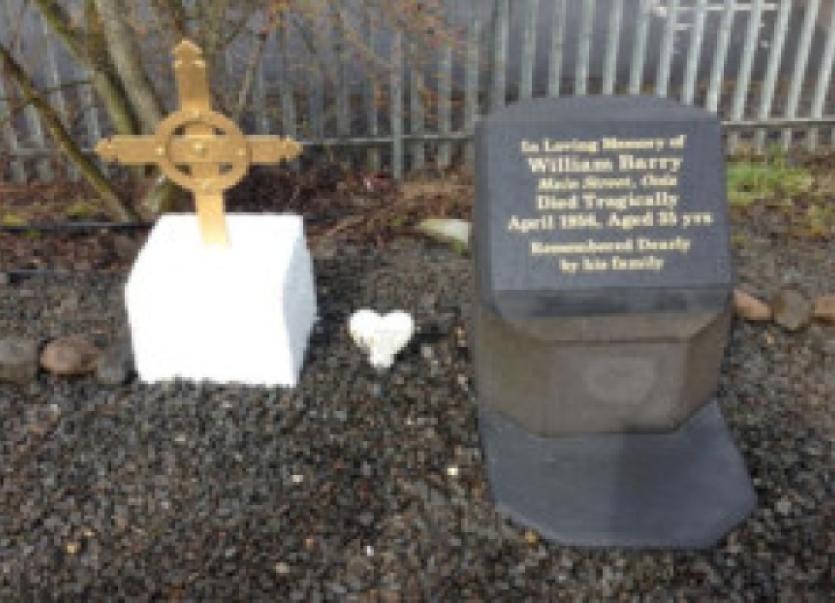 FIFTY-SIX-YEARS ago on Saturday, William Barry, from Oola, was killed at Limerick Junction aged just 35.

FIFTY-SIX-YEARS ago on Saturday, William Barry, from Oola, was killed at Limerick Junction aged just 35.

The Iarnrod Eireann employee was killed on the tracks when the buffer of a reversing train hit him. He left behind a wife Kathleen (nee Ryan Leahy) and five young children.

As a memorial a little cross on a stone base was erected near where Mr Barry lost his life.

His wife raised their five children on her own in one of the cottages on Oola’s Main Street. Her family came from Pallasgreen, while William’s are from Dromkeen. The five children - John, Larry, Joan, Marian and Anne Mai - emigrated to England in their twenties.

A daughter of Anne Mai, Dawn Bailey, was born and reared in England but her ancestral home remains close to her heart.

Kathleen continued to live in Oola until her death at 58 in 1974 and her daughter Anne Mai passed away two years ago.

Her wish was to be buried in Ireland.

Dawn say every year she and other family members visit Oola to pay their respects to the graves.

“Often we find ourselves catching the train down from Dublin. We get off at Limerick Junction to see my late grandfather’s little memorial, which was originally put in place for him by Irish Rail. It had become very neglected, unloved and rusty. I would always glance over but to view it became quite sad and upsetting for me. “It was like he had been forgotten about. No one knew his story. With my mum dying as well I felt I owed it to my grandfather to do something about it,” said Dawn, who lives in Leeds.

In January she got in contact with Jane Cregan, Irish Rail corporate communications executive.

“Jane had great empathy with the situation and with immediate effect they started to plan the renovation of the memorial site at Limerick Junction for us,” said Dawn, who was willing to pay for the work but Irish Rail kindly declined.

Two months later Dawn and other descendants of William Barry were invited back to Limerick Junction for the unveiling on April 11.

Dawn expected to see the original monument restored but Irish Rail had gone one better.

“The result was overwhelming. There was a new tribute to my granddad’s memory - a marble black granite plaque on a stone base with lovely gold lettering explaining what happened to my grandfather.

“Also, they had painted the original little white cross gold, which now stands out from the platform when we look over. We were speechless and teary eyed on seeing it. A very emotional day for us, His memory has been kept alive,” said Dawn.

On behalf of herself and all her siblings, Dawn wished to thank Jane Cregan and Michael Dwyer, Jim and all the staff in Limerick Junction and the stonemason.

“I can never thank them enough. We are for ever in your debt. It is a day that our family will never forget, It means so much,” said Dawn, who is already planning a return trip home and to Limerick Junction.