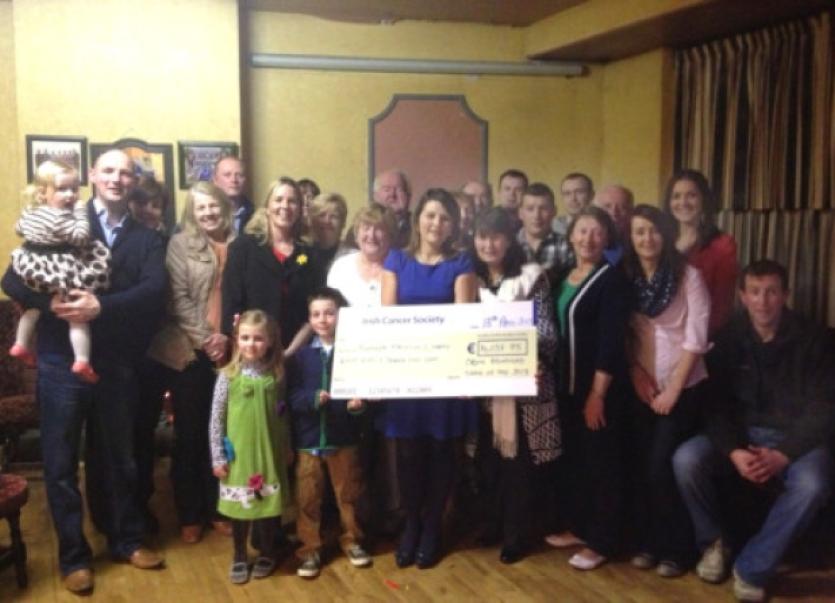 THE BRAVE souls in Dromcollogher and Broadford who put their locks on the line for charity raised over €14,000 for the Irish Cancer Society.

THE BRAVE souls in Dromcollogher and Broadford who put their locks on the line for charity raised over €14,000 for the Irish Cancer Society.

The proceeds from a hugely successful ‘shave or dye’ event at Neenan’s Bar, Broadford in March were recently handed over to the charity, following months of local fund raising.

The event saw 32 gallant men and women have their hair shaved, dyed or waxed off at an event that also saw a successful auction and raffle.

Ben Noonan, who was involved in organising the event, said that the level of support they received was above and beyond expectations.

“We appreciate that these are hard times, but people have shown real generosity for this fantastic cause, and have come to the fore as usual.

“Drom-Broadford shave or dye would like to sincerely thank everyone who played their part in making this fund raising event a fantastic success. To all who sponsored and donated, your money will be put to good use and we are very grateful”.

The shave or dye event at Neenan’s also saw funds raised via an auction of pieces of sports memorabilia, such as signed Dromcollogher-Broadford GAA, Celtic FC, Munster rugby and Limerick GAA jerseys.

Hotel breaks, gym membership and other items were also auctioned off on the night, while a number of spot prizes were awarded in a raffle.

As well as a number of local businesses, both large and small, the event was backed by Scoil Mhuire NS in Broadford, whose pupils raised money to have one of their teachers dye his hair.

Proceeds from the local campaign were recently presented to Joanne Murphy of the Irish Cancer Society at Neenan’s Bar.