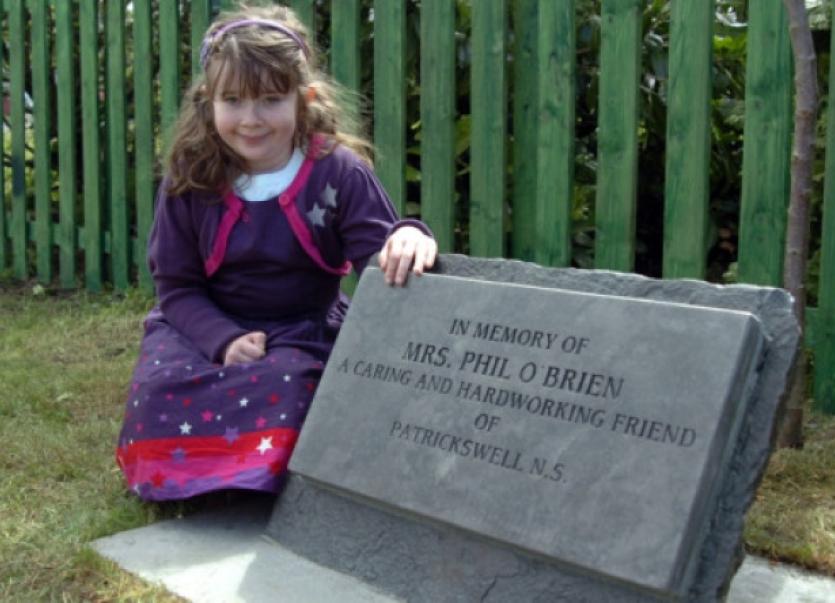 SHE was a stalwart in Patrickswell national school for almost three decades, a woman who was known to several generations of school-going children and who held their affection long years after they had left the school.

SHE was a stalwart in Patrickswell national school for almost three decades, a woman who was known to several generations of school-going children and who held their affection long years after they had left the school.

Now, two years after her unexpected death, Phil O’Brien has been warmly remembered by her school community and her contribution to school-life has been marked by a specially-commissioned plaque and the planting of a cherry blossom.

And in a gesture which she would have loved, the memorial ceremony last Friday was twinned with the school’s first-ever Grandparents Day which proved to be a winning formula. “It was a great community occasion,” school principal Ciaran Crowe declared afterwards.

Phil family members were the chief guests along with her neighbours in Marian Park. “But when word got out, many, many more turned up,” Mr Crowe said.

Phil, he added, was “a bit of an institution in her apron and on her bicycle.” “She was a very visible figure in the village.”

While her job description in the school was caretaker and cleaner, Phil’s contribution went way beyond that, Mr Crowe explained.

“She was a mother to the children who knew her always as Mrs Philly, a friend to the teachers, a security watch-dog for the school, often coming back at night to check up.” .

After 27 years service, Phil had retired some years back to look after her husband Matt who was unwell at the time and has since died. But Phil predeceased him and her unexpected death shocked those who had known her.

“We felt in the school we should commemorate her and celebrate her love of the school and of the children,” Mr Crowe explained and they set in train the actions which led to last Friday’s ceremony. .

The inscription on the memorial plaque reads ‘In memory of Mrs Phil O’Brien, a caring and hardworking friend of Patrickswell NS’.

It was unveiled by Mon Michael Lane, retired PP, and PJ O’Grady, the chairman of the board of management.

The school community and the O’Brien family and neighbours were joined by the pupils’ grandparents for the ceremony.

“It was a very healthy experience for everyone,” Mr Crowe said.

Phil O’Brien is survived by her sister Theresa Downey, by her sons Terence, Mike and Matthew and daughters Catherine Kehoe and Bridget Moloney, by daughers in law and sons in law and by her grandchildren. Her memory lives on among her friends and neighbours.