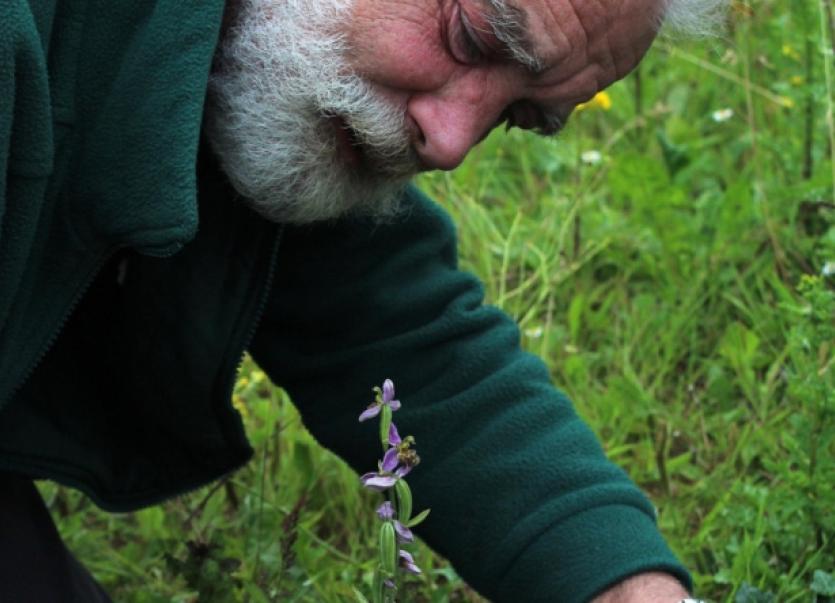 A rare orchid has been found amongst the weeds and overgrown grass in St John’s graveyard at John’s Square in Limerick city.

A rare orchid has been found amongst the weeds and overgrown grass in St John’s graveyard at John’s Square in Limerick city.

The ‘Bee orchid’, found by nature writer Albert Nolan, is said to be very uncommon in urban areas.

“It’s rare to come across in Ireland, it’s found mainly in the Mediterranean climate,” said Albert, who contributes regular articles to the Leader.

“The interesting thing about it is the flower looks like a bee. It even releases the same scent as a female. So the poor male comes along, thinking they see a female, and they try to mate with it, but what’s really happening is the flower has tricked them into pollination. It’s a very interesting relationship,” added Albert.

The orchid came to the attention of Limerick Civic Trust, who maintain the graveyard.

“We wanted to preserve the nature of the graveyard,” said Ger Imbush, who works for Limerick Civic Trust. “We trimmed back the grass and trimmed down the weeds but we left the initial cut go longer this year,” said. “This flower is very delicate, it’s only about six inches tall, you wouldn’t even notice it unless you went looking for it.

“We don’t know how frequently it flowers, it seemed to have just manifested itself,” said Ger.

“However, it is known that it could take between five and 10 years before it flowers again.”

Albert pays frequent visits to the graveyard, but even he didn’t know it was hiding there.

“I always pop in there because it’s a wonderful little habitat in the city. They were there all along but just never had the chance to grow, so it’s absolutely fabulous.

“We also found the Scarlet Pimpernel, a tiny little red flower. It’s also known as the poor man’s weather clock. When there’s rain on the way the red little flowers close up. People used to use that as a good indication that it was going to rain,” he added.