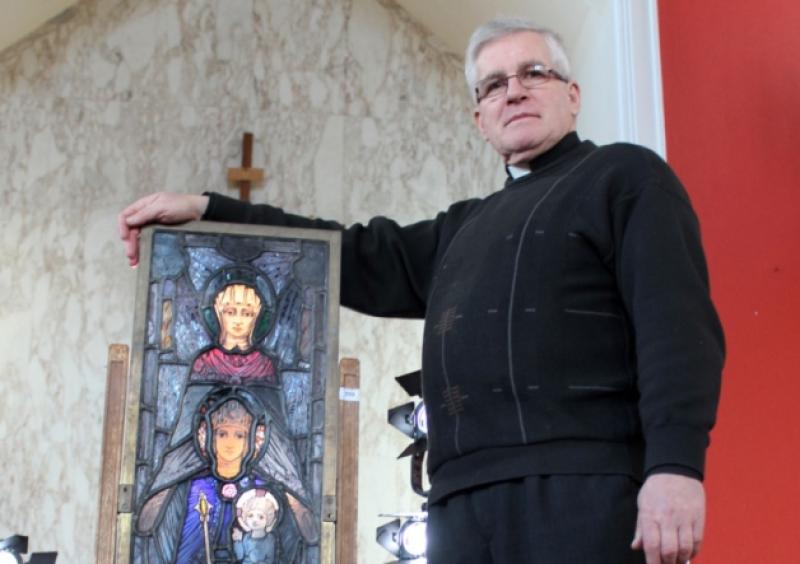 AN HISTORIC piece of stained glass has been reclaimed by parishioners in Kildimo – at a cost of €15,000 – and is finally beginning to “heal old wounds inflicted on the community”.

AN HISTORIC piece of stained glass has been reclaimed by parishioners in Kildimo – at a cost of €15,000 – and is finally beginning to “heal old wounds inflicted on the community”.

The glass panel, entitled “Jesus, Mary and Saint Anne”, previously hung in the old Kildimo church for decades – and was commissioned for just £20 some 88 years ago. But it was lost to the community when the old church – now a garage – was deconsecrated.

It is understood that a local priest, now deceased, gifted the item to the architect who designed the new church circa 1971, and it was sold by a member of his family at an auction in Kilkenny last week.

Fr John Donworth, the parish priest of Kildimo and Pallaskenry, made the trip, alongside former councillor and auctioneer and valuer Patrick C. Fitzgerald, to reclaim the beloved item, and purchased it with the consent of the parish finance committee.

Fr Donworth said he is delighted the piece is back in the parish - but said the valuable item won’t be hanging in the church for the present time “in case it disappears again”, as they want to secure a permanent mount for the item.

“We haven’t yet decided where to place it yet. It needs to be safely mounted, and the glass is quite dark so it needs a lot of light behind it. There was no talk about it for years, but we knew the piece had to be somewhere. A lot of families were upset with the way the old church was closed and [items] were sold off,” ” he told the Limerick Leader.

Mr Fitzgerald said they faced a tense seven-hour wait until their item, Lot 509, finally came under the hammer. “The prayers of St Anne and Jesus and Mary were answered on Wednesday last at Mealy’s Auction Rooms in Castlecomer,” he said.

The former county councillor, who contributes the Croom notes to the Leader, also said the “healing balm cost of €15,00 was a small price to pay.

“The majority of parishioners under a certain age will not remember the infliction of such wounds that needed healing, and the older ones will hardly need reminding of them. However, the incident that is alluded to is well documented and recorded in Fr Martin McCormack’s book on the history of Kildimo, of which the present matter of the window is but a side issue,” they stated.

Auctioneer George Fonsie Mealy said while they can’t be sure it was entirely the work of Harry Clarke, “he certainly had a hand in it at some stage during his lifetime.”

“It was commissioned in December 1926, at a cost of £20, four years prior to the death of Harry Clarke. It’s a really wonderful work of art. It has a lot of interest for its artistic merit, its significance and its quality. When you study it you see the quality and the workmanship that was synonymous with the Clarke studios.”

The piece measures 102cms x 35cms, is signed ‘Clarke, Dublin’ and comes with an original bronze casing frame. Harry Clarke, born in 1889, is regarded as one of Ireland’s greatest stained glass artists. During his short life he created over 160 stained glass windows for religious and commercial commissions, but few are believed to be left in Limerick. It was one of three Limerick related items up for auction, among 720 lots on Wednesday last.

Meanwhile, a work by renowned Limerick artist John Shinnors will be up for auction in Belfast next week for around €11,000. The piece – entitled Over Straw Island I – will come under the hammer at Gormleys auctions upcoming fine art sale on Tuesday, March 10 at 7pm, at 471 Lisburn Road.