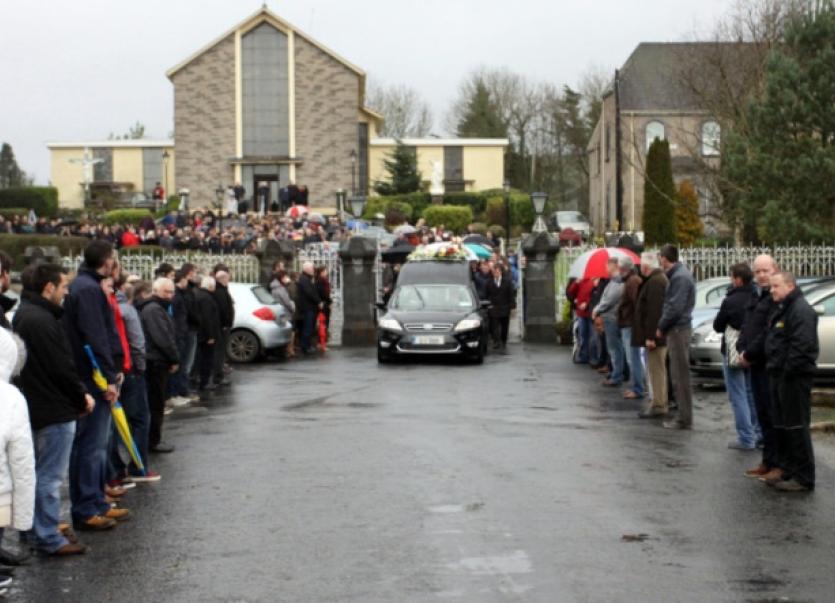 “THIS MONDAY morning, three days before Christmas, what is meant to be a joyful happy time – hearts are broken and spirits are crushed with the suddenness of it all.”

“THIS MONDAY morning, three days before Christmas, what is meant to be a joyful happy time – hearts are broken and spirits are crushed with the suddenness of it all.”

The moving words of Doon parish priest, Fr Tony Ryan at the Requiem Mass of 28-year-old Shane McLoughlin, who died tragically in a car accident last Thursday afternoon. It happened less than a mile from the McLoughlin family home in Cooga, Doon.

Over 3,000 paid their respects on Sunday night, while dozens stood in the rain because Doon Church was overflowing with mourners to say their last goodbye.

“At 28 you could say the world was at his feet – a qualified psychiatric nurse, loving his work in Ennis hospital, extremely popular with staff and patients and most obliging to all. Very attached to home on his days off, helping his dad Johnny with the greyhounds and mum Peg with the chores and errands.

“A dear and cherished brother to Annette, James, Tomás and Robert, and now this Monday morning all huddled in grief,” said Fr Ryan, who was joined by 11 other priests in concelebrating Mass.

He spoke of Shane’s vitality, pleasant personality, popularity and witty sense of humour.

“When news broke in Doon on Thursday evening the whole parish was in shock - stunned and saddened. All united with the McLoughlin family in grief. There is still an air of unreality about it all,” said Fr Ryan,

The youngest of five went to CBS primary and secondary school in Doon where he excelled in the classroom and on the pitch.

He played on a mini-sevens team in Croke Park and was the goalkeeper in an under 14 Doon team in Féile na nGael. But Shane’s first love was greyhounds. The McLoughlins are steeped in coursing. The symbols brought to the altar by his niece Jessica; nephew Joshua and sister-in-law Rosemarie were a greyhound plaque, his nurse’s badge and a family photograph. All so dear to him.

“Indeed, Shane was the proud owner of a dog who won his ticket to Clonmel. He loved his choice of profession. He excelled at his work with his professionalism and kindness to patients,” said Fr Ryan.

But at the heart of everything was his family. Both sister Annette and brother Robert spoke movingly after the service.

“We think of all the memories we shared when we were growing up and our lives had just begun. And as we grew up there were more special moments that proved the depth of your love and care.

“We will miss you Shane more that we could ever say, declaring all you meant to us and our endless love for you,” said Annette.Robert spoke of his brother’s love of his job, always willing to cover shifts and managers told them he is owed 40 or 50 days. The HSE sent in a tribute.

“All of his colleagues in the mental health services experienced Shane as dedicated to those in his care and was very popular with all of his colleagues. The HSE in the Mid-West would like to extend sincere sympathy to Shane’s family and to assure them that he was a valued professional and will be very much missed in the service.” Robert talked about Shane’s love of travelling but he would always ring his mum at 11pm when he was away.

“With all his socialising with friends and family he needed clothes to wear. Shane didn’t buy his own clothes. He was always going to my room and taking mine. I would text him saying did you ‘take my jumper?’ and he would say ‘no, I didn’t see it all’. An hour later I would see him tagged on Facebook wearing my jumper,” said Robert.

Shane’s great passion was coursing and come February in Clonmel, Robert said: “I’m sure we will hear Shane cheering on his dog up Powerstown Hill.”

He concluded by saying, “like in coursing Shane has run his final course”. “We will always love you and miss you dearly,” said Robert, to warm applause.

His coffin, draped in the Doon GAA colours, received a guard of honour from Doon Coursing Club as Shane was taken to his final resting place.

The words of the final hymn were appropriate – Silent Night’s sleep in heavenly peace.