Limerick monk gives meaning to ‘Nearer my God to thee’ 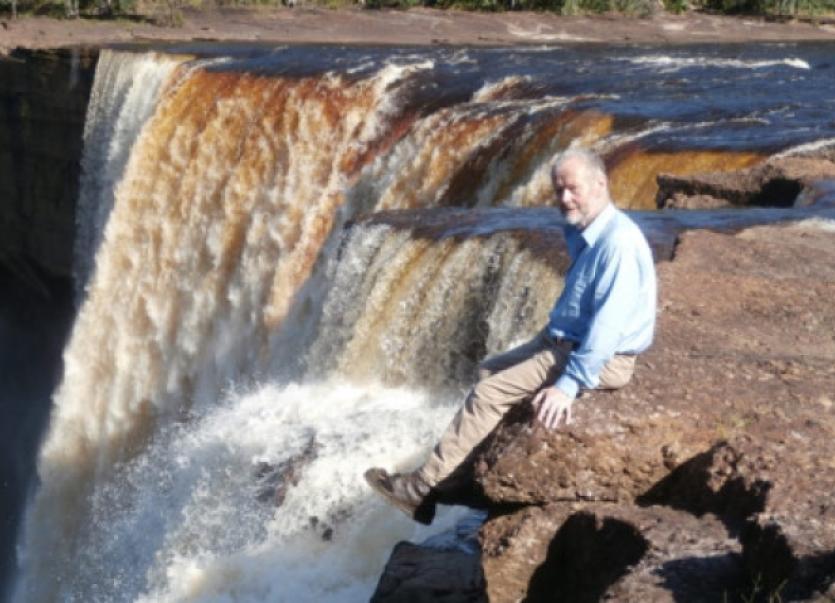 FR ANTHONY Keane has never been closer to heaven in more ways than one!

FR ANTHONY Keane has never been closer to heaven in more ways than one!

In a week he will never forget the Benedictine monk swapped Glenstal for Guyana for the adventure of a lifetime.

During his time in the country on the Caribbean coast of South America he visited the Kaieteur Falls. It is over 700 feet from top to bottom or to put that in context about four times higher than Niagara Falls.

Yet that didn’t stop Fr Anthony standing right at the edge and even with his legs dangling over the enormous drop, Nearer my God to thee, indeed! The photos are enough to make those of us afraid of heights say our prayers.

“I knew that if I fell people might say I was a right eejit - a deterrent worse than death. They said it anyway when I came back!” joked Fr Anthony.

He eloquently describes the plane ride on the way to the waterfall.

“As we approached Tepuis [table top mountain] country, the soils and the forest became thinner and more nutrient free.

“And then we saw it, the most magnificent waterfall in the world – like lightening shot from some high crag, the water fell with never a jag, a river steep and wide. The Kaieteur Falls on the Potaro River plunge in a single leap of over seven hundred vertical feet. The high plateau came up to meet our plane and we landed easily on the little airstrip with a full ten feet to spare,” said Fr Anthony.

They rushed to the vertiginous edge of the ravine, and then, in stages, moved upstream to the great waterfall itself.

“The volume creates such a down draught that the water generally retains its coherence all the way to the plunge pool which, with the speed of flow going into it, erupts in enormous volcanoes of white water a hundred feet up from below. The smooth cliffs are beautifully carved and a terrifyingly five degrees back beyond the vertical,” said Fr Anthony.

But not terrifying enough to stop him from getting a closer look.

“Standing on the narrow projecting rock overlooking the 741 foot drop to the erupting cauldron of rock and water at the bottom of the falls is not something normally recommended.

“While it is often good to overcome fear by logic and preparation, this was a little real and the margin for error and failure of system ranged from narrow to non-existent.

“Vertigo is always a possibility, especially if one lifts one’s head, but the terrifying magnetic attraction of vertical drops was not very powerful. The ever unfolding blankets of walls of water in free fall were so soothing, beautiful and comforting or perilously enchanting, that they spoke of the loving harmony and completion of Creation,” said Fr Anthony, who entered the monastery in 1965.

But he wasn’t quite as gung-ho as it may look.

“I did inspect the rock for hairline cracks, and I found little hollows, where pebbles had popped out, for my stick so that it would not slip on the hard rock,” he explained.

This is one of the most remote parts of the world with some sections of the plateau being cut off from the forest below by impossible 1,000ft cliffs on all sides.

“On one of these Tepuis, in 1912, Sir Arthur Conan Doyle placed The Lost World - the original Jurassic Park of more recent replication,” said Fr Anthony, who too has conquered this lost world.