Munster players cook up a storm in Bruff 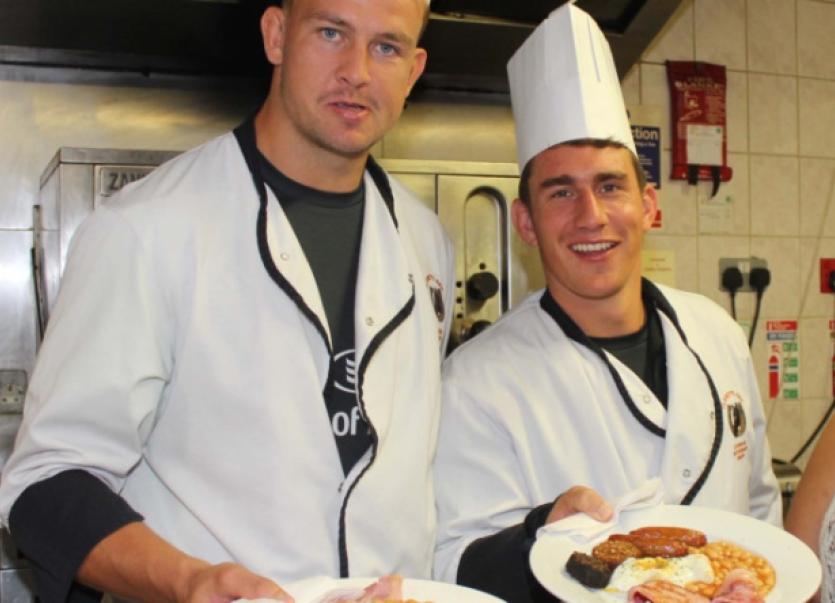 WHILE they are more used to the rough and tumble of the rugby turf, some of Munster’s most loved players have proved themselves a dab hand in the kitchen - particularly at rustling up a jumbo breakfast roll!

WHILE they are more used to the rough and tumble of the rugby turf, some of Munster’s most loved players have proved themselves a dab hand in the kitchen - particularly at rustling up a jumbo breakfast roll!

Described as the ultimate team-building challenge, the Munster Race saw players from the province make their way through local towns around the six counties last Wednesday and Thursday completing challenges and engaging with communities along the way.

The people of Bruff rolled out the red carpet for the red giants on Wednesday evening.

From 5.30pm - an hour before their scheduled arrival - fans lined up outside Nagle’s EuroSpar waving their Munster flags in anticipation of the arrival of the sporting heroes.

“We were here just before Hayesey [John ‘the Bull’ Hayes] retired and we got an unbelievable welcome but I think they have raised the bar once again,” commented Dave Foley on Thursday morning.

“So far, Bruff has given us the warmest welcome. Outside the shop last night there were hundreds of people – it just shows the love for Munster Rugby. It’s great!”

“We got a great welcome and all the lads are real happy to be here,” Simon smiled.

The winger and his team mates did some bag packing as well as a stint behind the deli counter in Nagles during their visit.

“It was like Christmas and Santa had arrived. The children’s eyes just opened up,” commented Alan Enright, chairman of Bruff RFC.

“The players had to make sandwiches and they had a competition for who could get a breakfast roll together the quickest. Gerhard van den Heever is supposed to be the best cook of the seven.”

While all the players went down a treat with the supporters, Simon Zebo, Alan said, had the X-Factor. “He is the most recognisable and they are all mad about him. He just has this way about him whether its his smile or the way he struts his stuff but Ian Keatley is the guy most in control – you could see he has coaching qualities in the future – he is a well-organised guy.”

During his visit, Simon Zebo took time to travel to the home of Johnny Ryan who was paralysed after a fall from a tree in 2011. Following the visit Simon posted a picture of himself and Johnny on his Twitter account.

“Obviously he had a rough accident and to still see him with such a beaming smile when I went to visit him was great. He seems like the type of guy who lives life with a smile on his face. He is an inspiration that no matter what happens, keep your head up. He is a lovely fella. I was honoured to meet him,” said the rugby star as he got his hair cut at Sinead’s hairdressers on the main street the town. “She is good, she is free-styling a little bit. I like it - she’s doing a great job. I’m looking quite well,” he joked.

Last year was the inaugural Munster Race and such was its success that it was decided to do it all over again. “It was a major success – the team was a heck of a lot closer after it,” commented Dave Foley. “I suppose this year they are looking for the exact same thing – getting the brand out there and getting us closer and closer together – working as a team.

“I remember when I was young I would only ever get to see Munster and Irish players on the TV, I would never see them out and about – maybe that’s because I’m from Clonmel – but here you can see the surprise in the kids’ eyes when they see some of the players. Hopefully, that will inspire them.”

After their visit to Nagles, the players enjoyed a meal at the rugby club in Kilballyowen provided by the Bruff RFC ladies committee.

John Fitzgerald of Harmonics was MC for the team building session in the main hall which included a Q&A session, and a Chinese Whispers game on a local story in Bruff featuring local characters.

“It was good old craic,” added Alan Cotter, the only Limerick man in Group 2.

“We ventured to a few spots. We are going to Kilmallock, Charleville, Newmarket, Castlegregory, Castleisland and then Dingle where will meet up with all the team to do a Q&A and then tomorrow we will train as a squad and we are off for the weekend.”

The players, who stayed at The Bank on Main Street, Bruff also visited the new Limerick FC grounds where chairman Pat O’Sullivan addressed them.

Thomas Carroll and his partner Siobhan Nelson and their children Sean, 8, and Sophie, 6, made the journey from Kilfinane to meet the Munster men. Sean’s favourite player is “Zebo”, and for Sophie, it’s Zebo too. “He is good in attack,” smiled Sean of why he favours the Corkman.