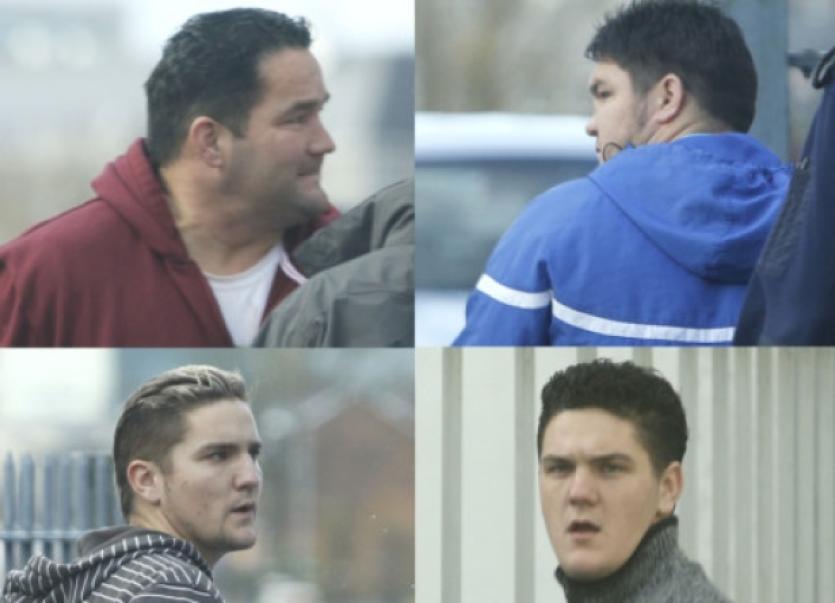 FOUR Limerick brothers have appeared in court charged in relation to a serious assault on a man at a petrol station in Croagh.

FOUR Limerick brothers have appeared in court charged in relation to a serious assault on a man at a petrol station in Croagh.

Late this Wednesday evening, Simon Casey (34), Jimmy Casey, (36), Terry Casey(29) and Francis Casey (22), all with addresses at Clonlong halting site, Limerick city, were charged with assault and violent disorder in relation to the alleged offence which occurred on November 23.

Det Garda Jerry O’Sullivan told the court that at approximately 2.30pm on November 23, the Caseys were in a vehicle that pulled into the forecourt of Smithfield garage, Croagh.

While there, the alleged injured party was entering the shop and he was called over to the Toyota Avensis the brothers were in. He was asked his name. When he gave it, the driver got out and allegedly struck the injured party, Michael Stokes.

Mr Stokes then ran through the garage forecourt, followed by the four accused. He was continuously assaulted in a ditch, the court heard. Det Garda O’Sullivan said that there were a large number of people there at the time.

The scene was captured on CCTV.

After the assault, Det Garda O’Sullivan said, the injured party received head injuries and was treated at University Hospital Limerick in Dooradoyle.

The garda added that he subsequently released himself from hospital “because he was in fear for his own safety.”

He went to another medical facility in Waterford, where he is still receiving treatment.

He said that Mr Stokes was unable to appear in court because he was still receiving medical treatment.

Det Garda O’Sullivan said that he believed the incident was as a result of a debt owed by the injured party’s in-laws to the accused.

It was a chance meeting and it was a message about getting that debt paid.

Late last evening the four brothers applied individually before Judge Alan Mitchell for bail. Simon, Jimmy and Francis were all refused bail and remanded in custody to appear by video link at Limerick District Court next Tuesday.

Det Garda O’Sullivan said that, in the case of Simon Casey, he believed that if the accused did get bail he would continue to commit other serious offences including intimidation of witnesses.

“They are a family that are well organised and will continue to commit serious offences if they are granted bail,” he stated.